The Castlemaine State Festival has been and gone for weeks now, but the open-air exhibition of portraits is still in place. The show, “Beyond the Studio”, was the work of MAPgroup – Many Australian Photographers. MAPgroup is an association of around 40 photographers who are committed to producing independent documentary photography.  The group says that, “Through our photographs, we tell stories that might not otherwise be told by the mainstream media.”

Late last year, the project organisers contacted lots of Castlemaine and district people involved in the arts – sittings were arranged in January – technical stuff happened – and then in the week before the festival in late March, large portrait posters were stuck up around town. Writers on our walls included some stellar locals, like Alex Miller, Cate Kennedy, Carmel Bird and Robyn Annear. There’s no false modesty when I say that I am definitely not as sparkly, so I feel rather special to have been included. I was photographed by the excellent and very patient Mike Reed. When he finally got me to relax, we ended up with this lovely happy photo. (Take a look at his site for his urban landscapes, too.)

Initially I found it rather challenging to walk down the lane past the chemist to the post office and see my very large face up there but I’m over it now. Perhaps I’ll even miss me when I’m finally torn down. 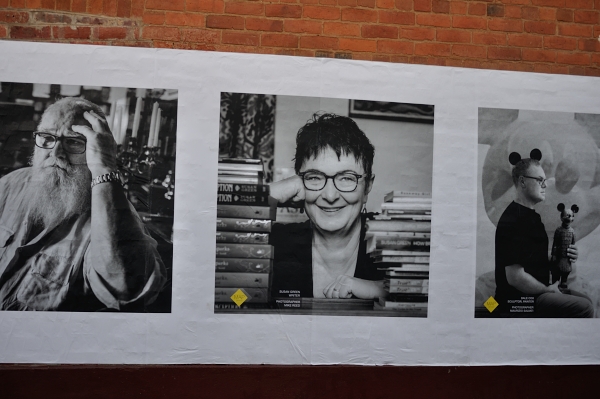 2 Responses to BEYOND THE STUDIO