My grandmother – my mother’s mother – died when I was 14. Her name was Phoebe. According to my mother, she associated her name with the cheery black maids you often saw in Hollywood films back in the 1930’s. Her ‘pet name’, the one my grandfather called her, was Tuffet. I have a few old cards, from her to him and from him to her – Harold and Tuffet, Tuffet and Harold. They were married in (I think) 1920 but he’d been gassed in the war and was never entirely well. He died in 1939.
The photographs of them at their wedding and as newly-weds show a handsome dark haired man and an extremely pretty golden-haired girl. She was the only daughter of a well-off and doting Papa.
I only ever knew my grandmother  – Nan – as an old lady. Actually, she wasn’t all that old but she’d had a series of strokes – the first before she was 50. Her muscles in her hands had shortened and they looked a little like claws but she wasn’t frightening. She was very gentle.

It’s funny, but what I remember most about visiting Nan is her things. She had lots of ornaments. There were china shells being carried by fat cupids on top of the piano; another china statue – a huge thing – of Boadicea in a chariot being pulled by two horses. The harness was made of thin leather straps. There were also a procession of ebony elephants in various sizes and a group of little red-clothed china imps. I loved those imps. Once, when I was four or five, I tried to take one home with me, but I got caught. I was in trouble, but I also remember the grown-ups laughing at me. Savage disappointment and humiliation raged in my small heart. On her dressing table she had a tortoise shell hand mirror which I have now – I still use it – and a cut-crystal perfume bottle with a  criss-cross pattern on it. Her perfume was Elizabeth Arden’s Blue Grass.

After she died, Mum gave me some of her things. The mirror, the petticoat Nan wore on her wedding day, a silk bridge jacket, a shawl, some jewellery, a collection of perfume bottles and a few other things. Over the past few years, I’ve started to give them away to my nieces. I have a son, but I wanted these relics to go to the female line of my family.
Most recently, I gave what used to be called a ‘toilet set’.Nothing to do with toilets – it’s really toilette, the French word which means, I suppose, something like ‘grooming’. I took some photographs – but of course since I dropped my external hard drive I don’t have all of those any more. Just a few. 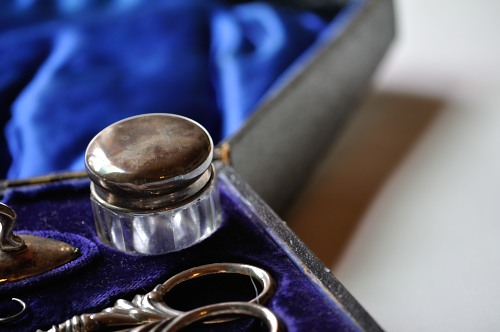 Here they are. The little silver-topped jars, the scissors, the button hook and nail buffer, the tiny brush that was used to groom one’s eyebrows. They’re things, objects. For my mother, they would have brought images of younger mother, in happier times. For me, there’s the older, stroke-affected Nan. 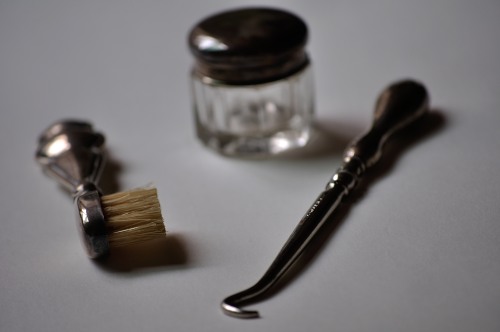 And for my niece, there’s no real Nan at all. Nan is at a distance; she’s a great-grandmother, someone on a family tree or perhaps an old photograph. When my niece looks at these things, perhaps she will think of me.