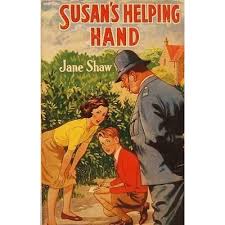 It wasn’t easy, however. Not only did  pictures of random friends appear, with the anguished (Facebook generated) message that they’d miss me, but I was required to give a reason. I ticked the box that said Facebook wasn’t useful to me, and immediately a whole lot of reasons why Facebook was useful to me popped up. One final hurdle; I was asked to log on in order to log out, but apparently my password was invalid. I tried and tried again but it was no go. After much swearing and general crossness, I decided to try changing my password. Well, the invalid password worked perfectly well this time; I made the change, logged in yet again and pushed the button. Ahhh… An extraordinary feeling of relief surged through me.
The week before I did this, I posted that in order to simplify my life, I was quitting. And while that is utterly and completely true, there is another other reason.
I’m just not a Facebook kind of person.

I found validation for my escape in a book by the American author and blogger, Gretchen Rubin. In 2009 she published a book called The Happiness Project: Or, Why I Spent a Year Trying to Sing in the Morning, Clean my Closets, Fight Right, Read Aristotle and Generally Have More Fun.
Rubin started this on-line project not because she was unhappy – her personal and economic circumstances are, frankly, better than most and moreover, she absolutely knew it – but because she wanted to be happier in the life she was living. Each month, she chose an areas of her life such as marriage, parenthood, friendship, leisure and mindfulness – to explore. She thought and read and researched and made resolutions. And she kept a chart to track how well she kept those resolutions. The blog was a great success and turned into this book, and another – Happier at Home – published in 2012. 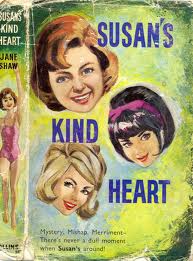 Now, this could be awfully twee and self-involved. Perhaps it is. I could also be critical of Rubin’s limitations. She’s not particularly adventurous; not curious about other cultures or religions; won’t try meditation; and is resolutely (that word again) her urban, middle-class, white, well-educated, professional, work-obsessed, routine-bound and somewhat obsessive, wholesome American self. But really, why ask her to be someone she’s not? And in fact, if I did a Happiness Project, it would actually be a lot like hers. I too struggle with impediments to happiness like impatience, cross moods and misguided perfectionism (and that’s only naming a few!) And I’m middle class etc etc And I’d like be happier in the life I’m living, too. And one thing I can start with is to imitate Rubin and create my own set of commandments. 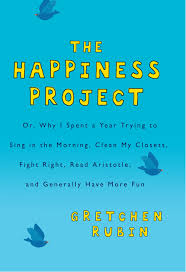 Rubin ended up with 12 of them, and top of the list was ‘Be Gretchen’. Well, I’m going to start with ‘Be Susan.” And you know what? While Susan loves her friends and family, she’s not on Facebook!