THE WEALTH BENEATH THEIR FEET 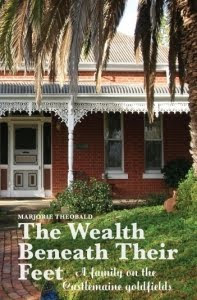 I have just finished The Wealth Beneath Their Feet: A Family on the Castlemaine Goldfields by Marjorie Theobald.  Though it is a history book, I read it as I’d devour a  fascinating novel – quickly, almost all in one go, finding it hard to put down and disappointed when I closed the covers for the last time.

It’s the history of the various branches of Marjorie Theobald’s family tree – German, Scottish, English and Irish –  from the time each emigrated from their homeland to settle in Castlemaine from the mid-19th century onwards. In order to do this, she mined her own childhood memories of older relatives and their reminiscences; investigated family myths and legends; read letters and postcards and family documents; tracked down photographs; walked the town to look at old houses (her great-grandparent’s house is just down the road from mine) and travelled to Scotland to “come home” to her heritage there. She found that there were relatives at the same time separately engaged in family research, and they were able to share information and fill in gaps in the record.

Of course, one of the things that made this so relevant and real is that many of the locations in this history – houses, roads and tracks, hills and gullies and creeks, goldmines and gold-mining scars and ruins –  are known to me. This is where I live.
I was especially interested in the section that dealt with the German branch of the family. Their home – called  The Hermitage – is only a couple of kilometres down the road.  Ever since I returned to Castlemaine in 1986, I’ve looked a little enviously at the place as I drove past. I’ve loved the look of the warm old sand-stone buildings settled with such rightness and permanence in the landscape; I’ve wondered too about its name. I never knew that it was originally a vineyard, and part of Central Victoria’s thriving wine industry.
As well as personal resources, Marjorie used research skills honed as a professional historian to ferret around in all the varying kinds of public records. She discovered some truly tragic stories in those records – such as two little boys “arrested” for being neglected children and put into a home (so-called – more like a prison farm). As well, she uncovered some “skeletons in the closet” – like children born out of wedlock, or just inside it – that would have meant silence and shame in the past, but thankfully do no longer.

I read The Wealth Beneath Their Feet because I am doing research for my latest Verity Sparks novel. More than getting my facts right (though I do want that, too), I want to get the feel of Castlemaine in Verity’s time. Verity, Papa, Connie and Poppy come up on the train for a peaceful country with a long-lost friend of Papa’s –  and become involved in (what else?) a crime and a mystery.
This story is set in 1880, and the stories in The Wealth Beneath Their Feet helped me see and feel the life of my town of nearly 135 years ago.  Much of the built environment remains from that era; Castlemaine has a wealth of splendid Victorian era buildings, both public and private. So it’s not a big stretch to imagine the town. Though there was still mining activity in the area, especially in the adjoining town of Chewton, the rough and ready”tent city” days of the gold rush are long gone.  Castlemaine in 1880 was humming with a different kind of activity; there were shops and businesses and industries, a market, churches and schools, pubs and clubs, a hospital and Benevolent Asylum, concerts, balls and sporting events. That’s the life I want to evoke –  the busy social and communal life of a thriving and “modern” 19th century country town. But (since this is a mystery, after all) the past has ways of coming back in the present…

I’m not telling how.

2 Responses to THE WEALTH BENEATH THEIR FEET