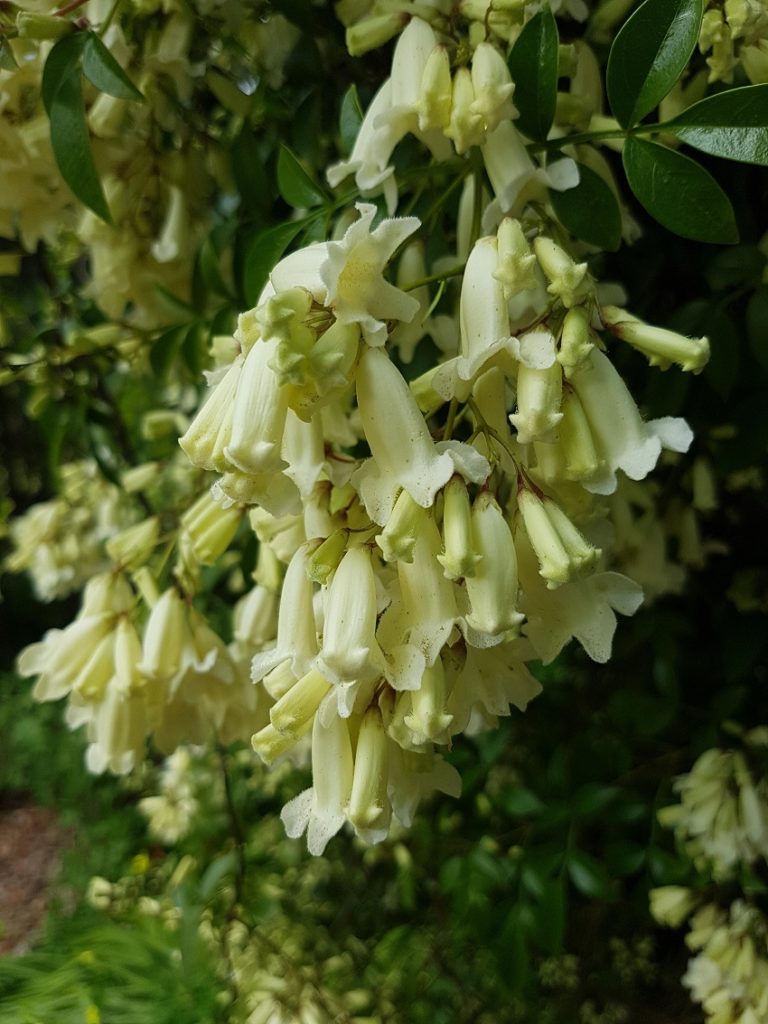 Isn’t this glorious? It’s called pandorea pandorana, or wonga wonga vine, but as I put out the washing this morning with this fecund froth of flower, bud and blossom bursting into full, overblown sweetness close by, what came into my head but…sukebind.
And the shamelessly over-written parody that is Stella’s Gibbon’s Cold Comfort Farm. It’s one of the funniest books I’ve ever read, and one that’s had a lasting impact since I first read it in my teens.

19-year-old Flora Poste, orphaned and disinclined to find a job, comes to live with her relatives, the Starkadders of Cold Comfort Farm, Howling, Sussex. They are a complicated and decidedly unhappy lot. There’s her aunt, the tragic Judith, obsessed with her over-sexed son Seth; her husband Amos, a religious maniac who preaches to the Church of the Quivering Brethren; their children, smouldering Seth, fey Elfine, brooding (but basically smart) Reuben. Not to mention the fertile hired girl Miriam, who’s just given birth to her fourth child of shame, and the doddery servant Adam Lambsbreath. Brooding over all, alone in her room, is Aunt Ada Doom, who – when she was a little girl – saw something nasty in the woodshed.

Flora is brisk and sensible and bossy, and in the course of the book, she sorts them all out.  At the climactic celebration, she surveys her work and finds it good.
There they all were. Enjoying themselves. Having a nice time. And having it in an ordinary human manner. Not having it because they were raping somebody, or beating somebody, or having religious mania, or being doomed to silence by a gloomy, earthly pride, or loving the soil with the  fierce desire of a lecher, or anything of that sort. No, they were just enjoying an ordinary human event, like any of the millions of ordinary people in the world.

I don’t know if it’s essential to have read the authors Gibbons is parodying – DH Lawrence, Thomas Hardy, the (possibly long-forgotten) popular novelist Mary Webb – and on balance, I think not. But helpfully in her foreword, a mock tribute to an imaginary writer of ‘records of intense spiritual struggles, staged in the wild setting of mere, berg or fen’, ‘more like thunderstorms than books’ Gibbons owns that it’s not always easy to tell ‘whether a sentence is Literature or…just sheer flapdoodle.‘  So, just in case, she says, she is marking her passages of finest passages with asterisks – one, two or three. Like so:

***The man’s big body, etched menacingly against the bleak light that stabbed in from the low windows, did not move. His thoughts swirled like a beck in spate behind the sodden grey furrows of his face. A woman… Come to wrest away from him the land whose love fermented in his veins, like slow yeast. She-woman. Young, soft-coloured, insolent. His gaze was suddenly edged by a fleshy taint. Break her. break. Keep and hold and hold fast the land. the land, the iron furrows of frosted earth under the rain-lust… the swelling, low burst of seed-sheaths, the slow smell of cows and cry of cows, the trampling bride-path of the bull in his hour. All his, his…
“Will you have some bread and butter?” asked Flora, handing him a cup of tea. 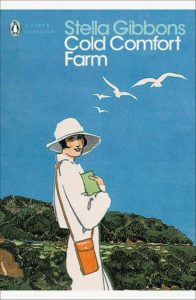 And it seems to me that passages like this, where common sense deflates melodrama, probably formed – if not my writing style – at least my sense of humour. It’s the sublime juxtaposed with the banal, and it tends to cut all that wild elemental passion off at the knees.
And then there’s my love of invented words and ridiculous names. Dickens is the star, of course, but who can resist the Starkadder cousins Urk, Caraway, Harkaway and Rennet? There are rustics called Agony Beetle and Mark Dolour, while the the local gentry  are the Hawk-Monitors of Hautcouture Hall and a crew of rich young men have names ‘like harsh animal cries’ such as Bikki and Goofi and Swooth. Even the animals are a treat. The cows are called Aimless, Feckless, Graceless and Pointless; the bull is Big Business; the horse is Viper. I could go on. But you should probably read and enjoy it in all its absurd, witty and oddly wise entirety.