THE GARDENER AND THE CARPENTER: What the New Science of Child Development Tells Us about the Relationship Between Parents and Children. 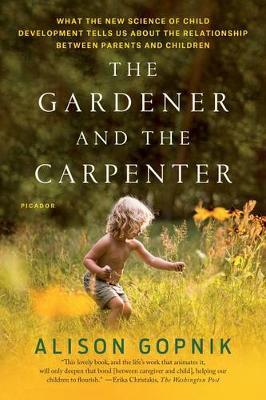 …if you are a parent, you do something called “parenting”. “To parent” is a goal-directed verb; it describes a job, a kind of work. The goal is to somehow turn our child into a better or happier or more successful adult – better than they would be otherwise or (though we whisper this) better than the children next door. The right kind of parenting will produce the right kind of child, who in turn will become the right kind of adult.
Of course, people sometimes use the word “parenting” just to describe that parents actually do. But more often, especially now, “parenting” means something parents should do…
I’ll argue that this prescriptive parenting picture is fundamentally misguided, from a scientific, philosophical and political point of view, as well as a personal one. It’s the wrong way to understand how parents and children actually think and act, and it’s equally wrong as a vision of how they should think and act. It’s actually made life worse for children and parents, not better.

The Gardener and the Carpenter by Alison Gopnik opened my eyes and reinforced my prejudices – at the same time!
A prejudice against the word ‘parenting’, for a start. As Gopnik argues, it’s a relationship, not a job. Now, it’s turned into a massive money-making opportunity. Over the years as a bookseller, I saw so many books by ‘experts’ published, pushing so many theories and making so many dollars as fashions and fads came and went.  The ever-expanding ‘parenting’ category! So much guilt and confusion! In my social circle, I saw people bonding over what they called ‘parenting styles’ (or philosophies or ideologies) and I saw the fallout when they differed.
I too agonised at times, with a horrible, searing mother-guilt. Was I just too lazy to do all that after-school stuff, the coaching, the lessons, the practice? Maybe. But basically I was convinced that it didn’t have to be that hard. Gopnik argues for less structure, not more. She gives convincing evidence that children (more or less, depending on their age) are meant to be messy, exploratory, unpredictable and wildly creative. I wish I’d known all this brain science when I was teaching, and when our son was young, and I would not have stressed so much about pack-up time.
Gopnik’s book entrenched my opposition to NAPLAN and all standardised testing for young children, too. Has it come to this, when large numbers of people seem to believe that ‘education’ is all about learning for tests, so that parents can rate and rank schools? There is a case for saying that standardised testing is politically, not educationally, driven. There is now so much new scientific research on how children learn, so why is it that we adults still want do things in the same old ways? The ABC is advertising “Reading Eggs” – an early learning program on a screen – for 2-to-6 year olds. 2-year-olds? Really? Shouldn’t 2-year-olds be playing? Gopnik would tell you, yes.
As an aside, somehow or other, our son was always absent from school on NAPLAN day.

The Gardener and the Carpenter is short and the sciency parts are easy to read but I found it a satisfying deep dive into this most basic of human relationships. Gopnik provides plenty of evidence for her views from the study of human evolution and all sorts of recent scientific research into learning and brain development. The take-away concept is stated in the title. She says that childcare is not best performed as if the parent is a carpenter making a chair. That’s because there is no correct way to do it; there is no blueprint to follow in order to obtain a predictable outcome. It’s much more like gardening, where you provide the best environment, you protect and you guide…but obsessive measuring and controlling won’t really help things along.
I thought this book was fascinating. Not just because I’m a parent. How children grow and mature within their families is the raw material of fiction.  Am I overstating the case if I say that the relationships between parents and children are at the heart of all the comedy, drama and tragedy in the world?

3 Responses to THE GARDENER AND THE CARPENTER: What the New Science of Child Development Tells Us about the Relationship Between Parents and Children.