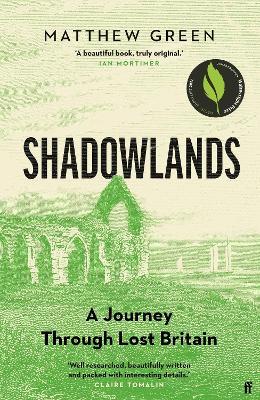 This tour of Britain’s ‘shadowlands’ is both haunting and horrifying. The writer explores eight lost places. They are the neolithic Skara Brae in Orkney; a once-thriving medieval town of Trellech in Wales; the port of Winchelsea, a 13th century naval base and important trading port; the rural village of Wharram Percy; the city of Dunwich, which slowly fell into the sea; the isolated Scottish island of St Kilda, whose inhabitants were evacuated after the population crashed to under 50; a whole group of villages in rural Norfolk taken over by the military during WWII and never returned to the inhabitants; a Welsh valley town called Capel Celyn, drowned under a dam to provide water to Liverpool.

There are poetic, elegiac, lyrical descriptions of ruins, relics and remnants in beautiful and often isolated places. There are towns that simply died, fell into ruin and were lost. There’s an enjoyable melancholy in wandering with the author around the remaining stones and walls, imagining long-ago lives.
But this is also a record of violence, cruelty and disease. Who knew that medieval French pirates raided the English coast, killing, raping and stealing? I thought that ended with the Vikings!
I’d heard of the deserted medieval ‘plague villages’ – and loved Penelope Lively’s Astercote –  but Matthew Green reveals that there’s more to the story. After so many people died of the Black Death, there was a labour shortage. The peasants started getting uppity. Enclosing the commons and turning to sheep grazing became a much more attractive proposition for landowners. The villagers were turned out of their homes.
Among the loss and sadness, it was good to read that though in 1964 the Liverpool Corporation simply bulldozed its way to what it wanted, the vanished village galvanised the Welsh into protecting their unique language and culture. English plans to drown other Welsh valleys were unsuccessful, and the Liverpool Corporation apologised in 2005, saying ‘What happened to the people of the valley was wrong.’

Green’s coda to the tales of these eight places is a little grim. He writes:
Many of our communities, it is unpalatable to say, are ghost-towns-in-waiting. In amongst the tales of human perseverance, obsession, resilience and reconciliation, and in the pleasure that can be found in  the ruins of lost places, this book has contained its fair share of horror. But it only goes up to 2021. A sequel, on the shadowlands of  twenty-first-century Britain, would be darker still. That…could be an apocalyptic volume indeed, with swathes of Britain more shadow than land.