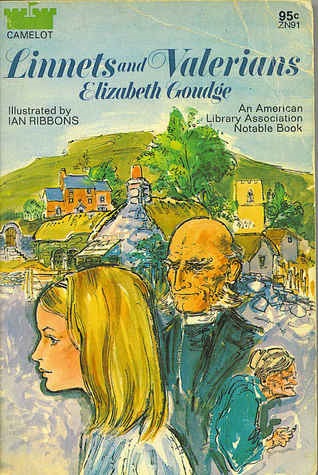 Comfort reading. Better for you than comfort eating!
But maybe both, together, are called for at the present time. Ukraine, climate crisis, the Morrison LNP government, covid, my sore back…let’s stop there. You get the picture.
Elizabeth Goudge is one of my top comfort authors (the others are Jane Austen and Barbara Pym) – but I realised recently that though I read most of her books when I was a teenager, I’ve only consistently re-read the Damerhosehay trilogy and The Little White Horse. Perhaps it’s because those books so perfectly and absolutely hit the spot.

In need of a comfort fix, I went to Kindle and – how lovely – found myself in Goudge territory again with Linnets and Valerians. It’s set in the early years of the 20th century, in the deepest Devon countryside, and her love of the natural world spills over in lush and lyrical description of the countryside, forest, moor and garden. Tapping into my other comfort genre (historic houses, and gardens), the old manor house with its overgrown garden – a kind of Sleeping Beauty house, left to go wild and decay – was also a delight.
Of course there are children and animals, too. Four children – bold Robert, sweet, introverted Nan, sensitive and intelligent Timothy and the robust baby of the family, Betsy –  are living with their strict grandmother while their soldier father is in Egypt. When they run away in a stolen pony cart – how marvellous!  – they end up at the home of their Uncle Ambrose, with his pet owl Hector and resident cat Andromache, in a neighbouring village.
He’s a stern but loving and very scholarly vicar and ex-schoolmaster; they are told they can stay with him, but they have to earn their keep with jobs and more importantly, dedication to their lessons. His housekeeper and cook, the one-legged Ezra, (who to some extent reprises the role of Marmaduke Scarlet in The Little White Horse) provides wonderful food, nurturing care, advice, stories and not too much supervision.
Complications and adventures and mysteries abound; there’s a sleeping-beauty house inhabited by a grieving old lady, her Black butler and monkey footman; a lost child; a sweet old lady who’s really a witch – and her terrifying witch’s cat; black magic; villainy among the villagers; and the magical protection of the bees.
Goudge’s novels always have a strong Christian spiritual element, but here’s she’s gone pantheist. The book (re-named The Runaways) apparently hit a snag with school libraries in the United States. Black and white magic, witchcraft, and above all, the appearance of the great god Pan proved difficult for them. After all, Uncle Ambrose tells Timothy that as a vicar, he can’t believe in the old Greek gods, but he – Timothy – has a choice…
And in the end, all mysteries are solved, the lost are found, the bad mend their ways. The children’s father returns to live in Devon and even brings with him the missing lord of the manor. Journeys end in lover’s meetings, as the old lyric says.
Not much realism here. And there are the usual racial, gender and class issues (Black servant Moses Glory Glory Hallelujah…) to be found in most older British children’s novels…

But what the hell, I say. I was comforted.

2 Responses to LINNETS AND VALERIANS