ONCE UPON A RIVER 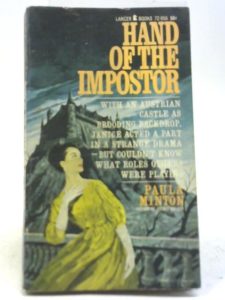 When I was a young teenager, I just couldn’t get enough Gothic. They were captivating, thrilling; a perfect package of romance, mystery, suspense. I loved Rebecca, Wuthering Heights, Jane Eyre, The Moonstone and when I ran out of literature I plunged in to the mass market. These paperbacks always had a young woman in a floaty dress fleeing a forbidding mansion on the cover. (I haven’t actually read Hand of the Impostor, but you see what I mean). Some had more sex than others but I mainly liked the mixture of old houses, lurking danger and vaguely supernatural threats. I even wrote one of my own for a school English project in form 3; it was called Burnt House and featured a good orphan and a wicked sexy heiress who got hers in the end.

Which brings me to Diane Setterfield’s The Thirteenth Tale.

Sold as a mystery in the vein of Rebecca and Jane Eyre, it’s a story about stories.
The famous and best-selling author Vida Winter has spent her life inventing stories, but has kept her tragic past a secret. Old and sick, she contacts a younger woman, writer Margaret Lea, and asks her to be her biographer. Lea agrees. She travels to Vida Winter’s isolated old house…and together they untangle the horrid truth from invention. I remember  a deliciously complicated, literary and decadent modern take on Gothic and I loved it.
It came out in 2006. I seem to have missed her next novel, Bellman and Black – a ghost story – but when a friend offered to lend me Once Upon a River, published in 2018, I knew what to expect. 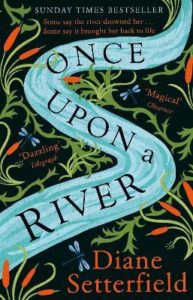 Which is a rambling way of saying that though it’s good to have expectations of an author –  their new book will be a bit like their previous one – the author may not oblige. Setterfield’s 2018 novel, Once Upon a River is more Dickens than du Maurier, and once I got over it, I was fine with that.

In a Thames-side inn sometime in the later nineteenth century, the locals are assembled on the night of the winter solstice, drinking and listening to stories in the snug warmth. The door opens. A badly injured stranger walks in with a dead girl in his arms. He’s patched up by nurse Rita; the little corpse is put into another room. Where, some time later, it comes to life.
Who is she? For it turns out there are three drowned girls; Amelia, the kidnapped child of a wealthy couple; Alice, the daughter of a local lad gone bad; and Ann, the little sister of the parson’s simple housekeeper.

From that dramatic start, the story meanders, branches, pools and floods, flowing around 500 pages to its end. There’s a large cast of characters and a number of strands to the story; there’s murder, prostitution, infanticide, kidnapping. There’s photography, medicine, Darwinian theories, folklore, early psychology. And there’s the river.
Once Upon a River is full of likeable, admirable characters with a few black-hearted villains, a bucolic chorus of locals, an ingenious, multi-layered plot and – is this a spoiler? – a happy ending. With the awful events unfolding in our world at present, Once Upon a River was a good weekend’s diversion.
And a note about those mass market Gothics. A few years ago I found one of my teenage favourites – Maulever Hall by Jane Aiken Hodge, and tried to re-read it. The book hadn’t changed, but I had and sadly (or not) the thrill had gone. I had thought I might re-read The Thirteenth Tale but perhaps it’s best to leave well alone.