I have a long-standing fascination with Britain during WWII and the decade afterwards. I’m not sure where it began; perhaps with my parents’ memories of post-war expat life in London, or old movies like Mrs Miniver, or the novels of Barbara Pym. A bit of a niche interest for an Australian, but around fifteen years ago I began reading non-fiction for more background information. It turned out I found the social history, such as David Kynaston’s trilogy, Tales of a New Jerusalem just as riveting, dramatic and moving as the fiction.

Virginia Nicholson’s Millions Like Us is all about the women. For me, it was utterly compelling. 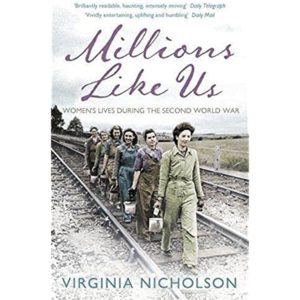 She uses diaries, letters, memoirs, interviews and autobiographies to chronicle the many varieties of female experience during the war. There are working class women and debutantes, vaguely bohemian girls and conservative middle class matrons, women who took on their war-time challenge with relish and others who couldn’t wait to get back into the home. Women were office workers, tram conductresses, farm labourers, foresters, factory workers, housewives, drivers, first-aiders, nurses, fire-watchers, messengers, code-breakers… Women as a group were desperately needed for the war effort, but many individual women endured a barrage of sexist prejudice and scorn from men in industry and other occupations, and of course in the military.

A number of specific stories are interwoven through the book, so that we move with a particular woman into, for instance, the navy, through the ups and downs of her career and out the other side into peacetime. Nicholson also follows family and personal lives as well as work roles; she’s interested in romantic relationships, affairs, marriages, friendships. There were some happy endings after the war’s end but for many women – widowed, bereaved, injured, exhausted –  it was not “bluebirds over the White Cliffs of Dover” but the beginning of a different kind of struggle.

Two of the stories have stayed in my memory. One is the young nurse,  Frances. In 1940, walking home after night of bombing, she was passing rescue workers at a bomb site when one of them called her over.
She now became aware that there was a terrible sound coming from the depths of the cater, seemingly underground; terrible screams could be heard issuing from a crevice among the debris…
The doctor, nurse and fire wardens in attendance were all too big to assist. They measured Frances’ hips and shoulders; she would fit through the gap into the hole. Stripped to her underwear so no clothing could catch on unsafe debris, she was lowered by her legs to see if it was possible to administer morphia. With a torch in her teeth, upside down, holding herself as rigid as possible, she hung in darkness and was able to locate a shockingly injured man, “crushed into a bloody mess.” They pulled her up, gave her chloroform, lowered her back down. She held the pad over what was left of the man’s face. There were other bodies, and body parts, in the cavernous hole. They pulled her out, gagging and retching, close to passing out.
“Thank you nurse. You did very well,” said the doctor. It was enough; she had played her part, and it was time to go home.
The stuff of nightmares.

The other is Frances, whose husband was part of the occupying British force in Berlin. She had a German nanny, Lotte, for her children. One day, Frances asked the young woman about her experiences before the capitulation. She showed the Englishwoman her diary.
It was horrific.
Filled with rage and malevolence against the German race, they found Lotte and repeatedly raped her, ‘not once…but time after time’.
Nicholson writes,
…the onslaught of the victorious nations was accompanied by a wave of unprecedented violence against women. It was as if the war’s calamitous endgame demanded a reassertion by men of their former ascendancy, an implacable conquest by the phallus. Over 130,000 women were raped, but women were discouraged from talking about it.
Nicholson notes that when the anonymous diary of a female journalist,  A Woman in Berlin, was published in 1947, it was controversial and condemned by some as a ‘slur on German womanhood’. But really, the idea was that  men – defeated, emasculated, impotent –  were already shamed enough. The subject of the rapes became virtually taboo.

By coincidence, shortly after I finished this book I read a news item about the Australian Lieutenant Colonel Vivien Bullwinkle, sole survivor of the Bangka Island massacre, where 22 nurses were driven into the sea and shot by Japanese soldiers. Shortly before she died, Vivian Bullwinkel revealed that she and most of the nurses were ‘violated’ – raped –  before being killed. But she was ordered by the authorities – government, military –  not to reveal the rapes. It was not politically expedient.