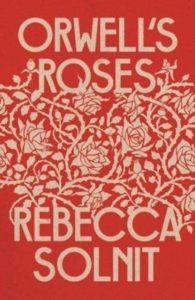 ‘Outside my work the thing I care most about is gardening,’ wrote George Orwell in 1940.

I will read anything by the American essayist Rebecca Solnit. Her writing is lucid and intelligent and playful; often travelling in unexpected directions to connect previously unseen dots; always political; fiercely intelligent and fiercely human. In examining Orwell’s legacy as a man, a gardener, a writer and an anti-fascist, Solnit meanders not simply into his biography, but into the history of coal, the tragic life of Mexican photographer Tina Modotti, Stalin’s obsession with lemons,  the exploitative rose industry in Colombia and the legacy of colonisation in Western names for Asian and South American flowers.

I knew George Orwell only through 1984 and Animal Farm. I knew he fought in the Spanish Civil War and was wounded; that he died of TB. In photographs, he looks gaunt and serious and high-minded. I didn’t know that he loved cups of tea, old British pubs, English puddings, cosy crime novels, watching toads and hedgehogs and other wildlife, fossicking in junk shops –  and gardening.

In his cottage garden in England and his farm in Scotland, he grew not only utilitarian fruit and vegetables but flowers. He planted roses; he wrote in an article for a left wing magazine about the joy of cheap roses from Woolworths, often wrongly labelled, so you didn’t know what was actually going to bloom and the flowers were a lovely surprise. An enraged lady correspondent complained; flowers were bourgeois. But Orwell thought that they were beautiful and life-affirming. As the song says, give us bread and give us roses.
Give us toads and hedgehogs and pudding.

These seem dark days. I sometimes feel guilty about how much I love living here in the country. My joy in watching wrens in the birdbath or the hare that comes lolloping through the bushes in the back yard. My pleasure in picking basil and making pesto for dinner. Bourgeois? Or a way of pushing back at the capitalist big brother who’s always urging us to be productive so we can consume? Both? There’s probably an essay in that.

Solnit ends the book with this summing up (I have put the last line in bold type):

Orwell’s signal achievement was to name and describe as no one else had the way that totalitarianism was a threat not just to liberty and human rights but to language and consciousness… that achievement is enriched and deepened by the commitments and idealism that fueled it, the things he valued and desired, and his valuation of desire itself, and pleasure and joy, and his recognition that these can be  forces of opposition to the authoritarian state and its soul-destroying intrusions.
The work he did is everyone’s job now. It always was. 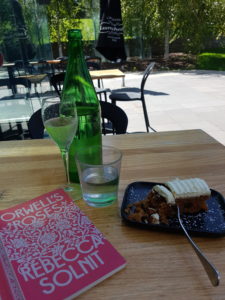 I’m a fast reader, and when I get excited I’m probably way too fast. I finished Orwell’s Roses at greedy speed, all the while aware that I needed to slow down, to consider what I’d just read, to think and consider. To smell the roses? A nice little lesson right there; I’m going to read it again.