I’ve been inspired by Kate Constable’s annual book accounting (with pie charts! heaven!) to be diligent about recording my reading in 2022. I’m off to a good start, but I am wondering if I should add a category; ‘Started, not finished’.

And note why that is.

Lately I’ve been, on and off, in a state of despairing grumpiness about the world in general and about me in particular – so I thought I’d return to some of my childhood books for comfort. Fantasy; English fantasy – that should do the trick. I ordered Susan Cooper’s Over Sea, Under Stone from the library. (I got rid of my own childhood copy years ago in one of my culls.)  The cover image below is the original, the one I brought as a 60c Puffin around 1967. 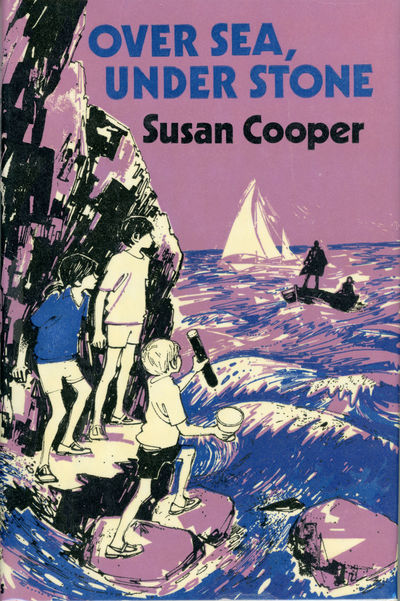 I only vaguely remembered reading it and I couldn’t actually recall whether I’d enjoyed it or not but I started it with high hopes. The beginning, with the three Drew children arriving in Cornwall to stay at the Grey House with the eccentric, enigmatic Uncle Merry, was promising. I settled in for the ride. My armchair;  a cup of tea; rain lashing on the windows outside. Me, secure in Cooper’s classic storytelling,  anticipating that  immersive mythic fantasy experience.
The rain fell. I read on.
Jane, Barney and Simon started to explore the old house.
Yes! An old house, with hidden rooms, secret passages, attics stuffed with junk and treasure; my favourite things!
Simon started to play at being an explorer. He said that if he’d been one:

“…I should have gone into the interior and the rude natives would have turned me into a god and tried to offer me their wives.”

“Why would the natives be rude?” said Barney.

“Not that sort of rude, you idiot, it means – it means – well it’s the sort of thing natives are. It’s what all the explorers call them.”

There was more banter about native bearers carrying their treasure back; about being turned into a sacrifice and eaten; about keeping the natives at bay.

Problematic? I began to wish I could just hang in there and enjoy the ride, knowing that the book was published more than 50 years ago, acknowledging that it’s an artefact from another time. But when you start to notice this stuff, it really stares you in the face. And having just read Bernardine Evaristo’s Girl, Woman, Other, it hits you in the guts, too. Imagine if in 1965, I was a little British girl reading this story, and I was black…

Imagine I was a little girl.

Girls, we are to understand, are natural vibe-sucks. Poor Jane is so girly, and that’s variously boring, laughable, pitiable, endearing, annoying. She’s anxious and conscientious; squeamish (even having her brother tease her about being sea-sick makes her feel sea-sick); she’s a goody-goody, wanting to play by the rules and anxious when her more adventurous brothers break them; she gets scared; she fusses and worries about dirt.

“Simon!” said Jane, gazing at him in horror. “You’re filthy!”

She meant well, after all.

I know Over Sea, Under Stone is a landmark in British children’s fantasy, the first in The Dark is Rising sequence. And I know that like the fantasy novels I most enjoyed as a child, it’s got a real inner seriousness, a moral dimension, letting children know that they too can be part of a great, eternal battle between good and evil in this world. It’s lively and well-written; adventurous and imaginative, a fascinating mixture of a familiar modern world that has a powerful mythic dimension pulsing just beneath, waiting to surface…

I think about little girls, and black kids. I accept that Cooper is a writer of her time. I wonder if I am turning into a prig. I ponder political correctness, and censorship. What if the Empire builder fantasies – well outdated even at the time; what had those boys been reading?  –  were removed?
I don’t have any answers.

I didn’t finish the book.

1 Response to STARTED, NOT FINISHED