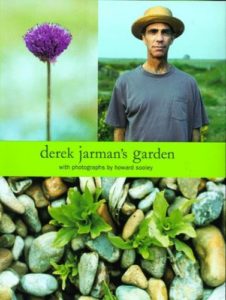 At first, people thought I was building a garden for magical purposes –  a white witch out to get the nuclear power station. It did have magic – the magic of surprise, the treasure hunt. A garden is a treasure hunt, the plants the paperchase.
I invest my stones with the power of those at Avebury. I have read all the mystical books about ley-lines and circles – I built the circles with this behind my mind. The circles make the garden perfect…

Modern Nature by Derek Jarman was a mash-up of memoir and making art, gay history and gossip  and gardening. In Jarman’s garden on the inhospitable shingle and sand of Dungeness, opposite a nuclear power station, the seasonal parade of birds and insects and flowering plants is made more poignant by the spectre of death. Not just ‘death’ in general, in the future, but imminent and awful. Jarman was himself HIV positive; friends were dying. It’s difficult now to remember that AIDS in the early 1990’s was (to most of the ones who contracted it) genuinely a death sentence. I lost a handful of beautiful friends. It’s so different now.

Derek Jarman’s Garden is his last book. He wrote the text and the photographs are by his friend Howard Sooley.  While the shadow of death is there, so is the joy of designing and planning a vision of paradise. Cobbled from found objects, driftwood, stones and shells, planted with the area’s indigenous flora – aka, in many cases, ‘weeds’ – as well as introduced plants, it looks like a magical place.

I’m finding gardening, and reading about gardening, is both soothing and addictive in these strange unsettling times.