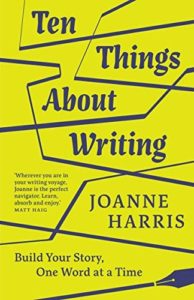 And this one is a useful guide from an experienced writer of the aforementioned heaps of books. After thirteen books published, I guess I am also an experienced writer but I can always do with a little help. Sometimes there’s just the one little gem that makes sense; sometimes it’s more that reading about writing is a way of getting back in touch with my writerly self. Sparkling away in the section on Permission was this, at #4.

Stop comparing yourself to other writers. Compare your work to the last thing you wrote. If you’re improving (and you are), you’re doing fine.

As a perennial self-doubter and second-guesser, it’s a fine piece of advice. All I need to do is my personal best.

The ‘ten things’ format means it’s succinct and structured and decimal (or do I mean metric?) so that the ten parts divide neatly into ten sections. Why ten? Why not, I say. It’s not too many and not too few. I was delving into my filing cabinet the other day and found a series from the Guardian that I copied way back in 2015. It was Ten Rules for Writing Fiction from many famous novelists, the likes of Hilary Mantel and Ian Rankin and Sarah Waters. Some were generous and serious in their approach to these ‘rules’; others, like Phillip Pullman (‘My main rule is to say no to things like this, which tempt me away from my proper work’) more or less said “Nick off.”

The book also made me think about my own Ten Things and Ten Rules. I spent years teaching creative writing in community settings and dishing out the advice, which was mostly not my own but synthesised from  other sources, like that article in the Guardian. These days I’d probably say that my Things About Writing  vary from day to day, depending on how the work is going. Today, I was at my laptop editing and formatting a short story and struggling with auto-correct and footers and headers so I’d probably emphasise the sheer slog and bum-on-seat and ‘do it when you don’t feel like it’ aspect of writing. But on Saturday, I was on a roll joyfully inventing and creating and making stuff up out of thin air, scribbling cryptic notes and ideas into an exercise book. Quite a different Thing.

1 Response to TEN THINGS ABOUT