It’s a thing, a genre. It’s my new obsession. Women, walking. Women thinking while walking. Women walking while looking backward and forwards, moving between their pasts and their futures and meditating on nature. Human nature seems to come into stark contrast with the other kind, whether wild and tamed, whether animal, mineral or vegetable. Something about walking, putting one foot in front of the other no matter the weather or the terrain or the state of your feet, seems to work some kind of magic, seems to restore bodies, hearts and minds – if not to health and happiness, at least to some kind of workable balance.

The first of the genre to pop into my consciousness was the American writer Cheryl Strayed’s memoir Wild. It was published 2012 and describes her gruelling 1770 kilometre trek on the Pacific Crest Trail. I often found myself wincing as I read. Not just from her descriptions of the skin peeling from her blistered feet, but from the lacerating unsparing inventory of her life she took along the way. Her journey of self discovery was often brutal.

Now, more books have popped up. This year, I’ve read Sarah Wilson’s This One Wild and Precious Life, Katherine May’s The Electricity of Every Living Thing, To the River by my new literary girl crush, Olivia Laing and Raynor Winn’s The Salt Path, 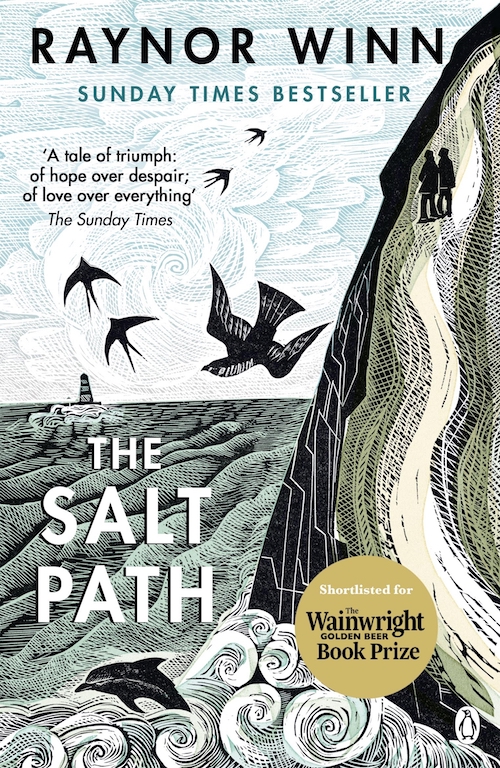 Raynor Winn and her husband Moth have lost their farm due to a legal dispute; it’s their own incompetence and inexperience with the law that’s tipped them into homelessness. I mean, really; they have no home, and the government benefits provide very little money. Added to this, Moth has been diagnosed with a terminal illness. So they decide, seemingly on a whim, to walk the South West Coast Path, over a thousand kilometres from Somerset to Dorset. Though Winn competently describes the beautiful landscape of cliffs and beaches and sea in Devon and Cornwall, where her writing comes alive for me is in the difficulties of the walk.  The bad weather, the nights spent illegally in car parks or in farmer’s paddocks, waking to the sound of farting cows; the al fresco toileting, the feeling of  unwashed hair and body and clothes. She and Moth struggle with hunger and exhaustion, with sore feet and encroaching illness, but she’s matter of fact. They get on with it.

We left Bude with enough twenty-pence packs of noodles to last a week and a lot of water. Walking out of the genteel holiday spot, past the retired ladies tennis club, past the strangely folded rocks and the tower on the headland. The path felt remote now. Without money, we had moved into a world apart. It was nearly dark when we found a corner in a field of thistles, ate noodles and slept.

They make miserable mistakes with money and Winn writes movingly of her feeling of exclusion by virtue of their poverty and homelessness. She is a thoughtful writer but it’s not a lyrical or literary book, rather a gritty tale of love and endurance and redemption. Because in the course of the walk, Moth goes into a kind of remission, their 32-year marriage grows even stronger… and Winn finds her voice as a writer.