I always think that here in Central Victoria, the weather turns after Easter. With daylight savings ended, the daylight dwindles and we begin the slide from autumn into winter. Today, Easter Sunday, it’s seriously hot and the local swimming spot – the Golden Point reservoir – will probably be crowded. But the weather forecast tells of a ten degree dip in the temperature on Monday, and a cooler week. No more swimming, except for the hardy few who swim all year round. I’ve seen them, even in winter, bobbing around in the grey water under grey skies. 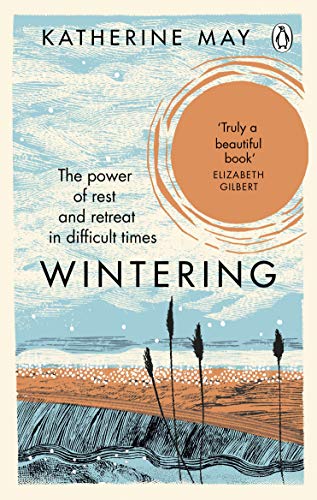 I always thought they were a bit crazy, but I’ve just read Wintering by English writer Katherine May, and one of her many insights is the joy (and possible therapeutic benefits to people with inflammatory and mental health disorders) of swimming in the cold. By coincidence, a friend – a long term regular swimmer –  has switched from heated pool and laps and lanes to swimming at the reservoir. Every day. It’s deep and very cold, she says, but she sees dragonflies and aquatic insects among the reeds, and swallows darting and swooping overhead. Birds call from the surrounding bush. She thought she saw a kingfisher. It’s beautiful. I am wondering about giving it a try, just once.

But back to Wintering. It’s an exploration of the dark times, the fallow times, the times when we need to stop and… Well,  just stop. Wintering, through May’s eyes, is a process of retreating, repairing, and renewing. She begins her descent into the dark with her husband’s sudden collapse and hospitalisation – a burst appendix – and then her own mystery illness. She takes sick leave, she quits her job as a university lecturer, she begins to home school her child, she bakes and preserves, she begins the practice of swimming in the cold English sea. She reflects on her travels to the parts of the world where winter lasts half the year; on ice and snow; on saunas and thermal pools and layer upon layer upon layer of clothing; on the children’s books like The Box of Delights where the action takes place in the depths of winter.  She slows down. She meditates and reads and writes. And she heals.

Wintering is beautifully written and warming and consoling. But also an aspirational fantasy. There are many people who aren’t writers and university lecturers who desperately need a season of wintering. Need to stop (paid work, unpaid caring) and rest and repair. And for whom the very idea is ridiculous. I think most readers would agree that this book is written from a position of great privilege. But I don’t know that necessarily negates her message. Wintering is part of the natural cycle of life; don’t fight it. Even if you can’t enjoy it, embrace it. Renewal will follow.