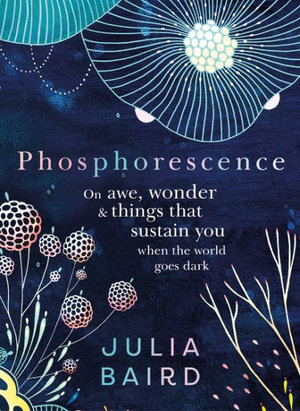 There are few things as startling as encountering an unearthly glow in the wild. Glow-worms. Ghost mushrooms. Fireflies. Flashlight fish. Lantern sharks. Vampire squid. Our forest floors and ceilings, our ocean depths and fringes are full of luminous things, creatures lit from the inside. And they have, for many centuries, enchanted us, like glowing missionaries of wonder, emissaries of awe.

Is there anything more beautiful than living light?

Julia Baird could not have known, while she was writing Phosphorescence, just how timely her book would be. Subtitled ‘on awe, wonder and things that sustain you when the world goes dark’, it’s been a lovely counterbalance to the gusts of bad news that keep swirling around us.

It’s not really a memoir, nor is it self-help or a collection of essays or a book of nature writing –  but contains elements of all four. Some of the impetus to write Phosphorescence is Baird’s experience of pain and illness. In 2015, she was diagnosed with a rare kind of cancer, which recurred twice, needing surgery and rounds of chemo. Though Baird talks about her cancer experience, it’s not a blow-by-blow account. As Lissa Christopher wrote in her ‘Lunch with…’ interview in the Melbourne Age (‘Spectrum’, 13/6/20) illness is  ‘the dark background against which the rest glows’.

And glow it does. There are lyrical and lovely descriptions of swimming and walking and observing the natural world, along with excursions into the science of why such things are so very good for us. Who knew that forest bathing was a prescription? Baird urges us to pay attention; to embrace the soothing power of the ordinary; to seek nature; to experience awe whenever we can.

Awe makes us stop and stare. Being awestruck dwarfs us, humbles us, makes us aware that we are part of a universe unimaginably larger than ourselves…

Wonder is a similar sensation, and the two feelings are often entwined. Wonder makes us stop and ask questions about the world, while marvelling over something we have not seen before, whether spectacular or mundane.

Nearly thirty years ago, in mid-1991, I woke from a dream. We all have lots of dreams, and most of them vanish from our minds almost as soon as we wake, but this I’ve never forgotten. It was nothing Freudian or Jungian or fantastical, just a voice, saying something I still find deeply mysterious. It said, “In-dwelling light.”
Every now and then I think about that phrase. Where did it come from, what does it mean, was it a mantra, was it a message?  Phosphorescence has me wondering and pondering all over again.