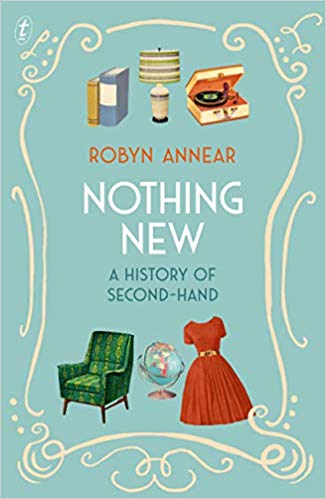 Nothing New: A History of Second Hand is light and cheerful reading,  full of Robyn Annear’s usual sparkling anecdotes. But there is also enough substance to get me thinking very seriously and personally about waste.
Robyn makes it clear that there used to be almost no such thing. Clothes were passed on, repaired, re-cut and re-styled, used as rags, and the rags used to make paper. Food was rarely thrown away, but even bones were valuable for use as buttons and to make glue. Broken and unwanted household items of all kinds found repairers or homes or were stripped down into useful parts.
The ingenuity, thrift and hard work of those recycling folks in the past wasn’t motivated by virtue, by saving the planet or detoxing from plastic. It was just plain good economic sense.

Here’s the list of ‘wanted items’ from a London Rag, Bottle and Kitchen Stuff Warehouse in the 1850s:

These second-hand dealers, she writes, ‘were everywhere in an age when necessity, more than virtue, dictated there there was ‘no such thing as waste’. Lately there have been stories in the news about hazardous waste stockpiles, unusable mountains of paper and glass in recycling facilities, containers of commingled recycling turned back from their destinations in Asia because they’re disgustingly contaminated. These stories make me wonder – why haven’t we had the intelligence and imagination to see the whole life cycle of our plastic drink bottle, our cheap plastic toy, our polyester T-shirt? Where was all this disposable stuff going to go? Because it’s not going to go away on its own, given that it takes hundreds or thousands of years to break down, and even then it remains in the soil and the water. So – what were we all thinking?
I lazily thought my household was doing very well. Only one small bin for landfill rubbish, and that not filled each fortnight. A large one for virtuous recyling, mostly glass, tin and paper/cardboard. That one is rarely full, too. But with the recycling crisis in this country, I think we’d better do better. Olives in glass jars rather than plastic tubs? But what’s happening to those carefully washed and re-cycled jars? No olives? Less olives? I don’t know!

On a much cheerier note, Robyn talks about bazaars, jumble, rummage and white elephant sales, and one of my great loves –  the Australian Op Shop. Here’s how it began. In 1925, the St Vincent’s Hospital was raising funds for expansion. A soon-to-be-demolished building called the Cyclorama stood on the proposed building site. On the committee was one Lady Tallis.  Just returned from overseas travel in France and the US, she’d seen the popularity of second-hand shops run for charity. Why not try this idea in Melbourne?
Lady Tallis took charge and, in christening the enterprise, paid a nod to its continental progenitor, le magasin d’occasion. But while the French occasion here signifies ‘bargain’, it can also be used to mean ‘opportunity’.
Thus, in the Cyclorama, for three months straddling Christmas 1925, the first ever opportunity shop was born.
And hooray for that!

Robyn’s account brought back so many happy memories of triumphant Op Shop forays and adventures. I still have some of my finds from the early 1980s and the fantastic Oppies of Hawthorn and Richmond. These were part of my regular beat, but any country trip was sure to unearth treasures by the carload. And cheaper than city Op Shops, too. I once bought a complete, unused Fowler’s Vacola kit in Echuca. The kind old lady asked me if $11 was too much? Not at all, I said.
The best Op Shops were always staffed by these fantastic old ladies. Full of really old stuff. The spaces were crowded and even cluttered. Sometimes the shops had been organised into categories (up to a point) but lack of room usually made them somewhat chaotic. What a good sign!  Because in amongst the clutter and chaos lurked buried treasure. Like Kath (of Kath and Kim) I could feel it in my waters. Cocktail shakers, vases shaped like shells, actual shells (once, a large plastic bag full of money cowries), lamps and lampshades, costume jewellery, printed 1940’s housecoats, stilettos, smart and unworn brogues, 1930’s silk step-in undies, knitting patterns, camera cases, leather handbags, printed headscarves made of French silk with hand-stitched edging, beaded cardigans made in Hong Kong…
My trip to Daylesford last week took in a back appointment, the Vinnies and the Salvos. These Oppies now have merchandisers, who style the shops to look like boutiques. Displays of accessories and racks of clothes are often colour coded, with lots of synthetics and fast fashion items.  The crockery and homewares are all newish, often those white, made-in-China basics. Ugly (but not in a good way) decorative items abound. Nothing ‘retro’ or ‘vintage’ or even a bit old is on show. Do they hive those items off to dealers? I’m old school, I know, but I miss the Oppies of my past. Today’s can be good for utilitarian finds (a pair of never-worn runners, a rain jacket, sturdy tumblers) and also for books, though no longer for really old books and magazines. But increasingly rare is the old-style thrill of the chase.
But I keep dropping in, flipping through the hangers, fingering the material, cruising the racks and displays and shelves and bins, hoping – yes, I’m a gambler at heart! – for that  real, heart-stopping, amazing and magical find.

Thanks to Robyn Annear for this funny, informative, thought-provoking and for me, nostalgic, history.

Nothing New: A History of Second-Hand by Robyn Annear, Text, 2019

3 Responses to NOTHING NEW