THE BODY KEEPS THE SCORE 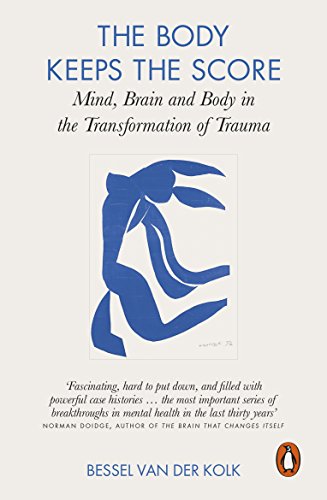 Often in bookselling there are titles that come to my attention not because of advertising and promotion or the fame of the author, but via the good old word of mouth. This year, with so many customers ordering this book, I gradually became intrigued. I thought I’d better see what all the fuss was about.

In a case of serendipity, it’s turned out that this was exactly the book I needed to read. I’m working on a new novel, and as research The Body Keeps the Score is brilliant, backing up some of my writerly intuitions with science, and correcting others.

But it’s also an important book for the general reader – anyone, everyone. It’s not just for people who’ve experienced trauma. Or for those who love, live and work with them. I don’t think the author, psychiatrist Bessel van der Kolk, is overstating things when he writes that trauma is one of the Western world’s most urgent issues.

Post Traumatic Stress Disorder (PTSD) doesn’t just effect soldiers and veterans, police, fire fighters and ambulance crew. Abused and neglected children, people who’ve been raped, accident or disaster victims – anyone who’s experienced a deeply distressing and disturbing event can have their ability to cope completely overwhelmed.  This is millions of people. Our health and justice systems systems are overloaded and reeling from its effects.

Van der Kolk shows how a cascade of harm – mental and physical health problems, unemployment, crime, domestic violence, child abuse and neglect, drug and alcohol abuse, not to mention heart-breaking human suffering – follow from unaddressed trauma. The physiological changes are real and measurable. Trauma will always find a way to manifest in the body.

The Body Keeps the Score is a fascinating and troubling book. It’s distressing to think that – a bit like climate change – the science is there, the research is there but we continue to sit on our hands. Our governments would rather build more gaols than invest in early intervention programs with new parents and young children. Van der Kolk writes, “If your parents’ faces never lit up when they looked at you, it’s hard to know what it feels like to be loved and cherished,” he says. I read in the news this week of a young father who shook his 5-month-old baby son so hard that the child now has debilitating brain damage. Why? Apparently, because his own father had told him that ‘men don’t cry’.
And so the bitter cycle continues into another generation.

Highly recommended; moving and – yes – very disturbing. Lots of science, some gut-wrenching personal histories but also some inspiring and hopeful stories of change and recovery.