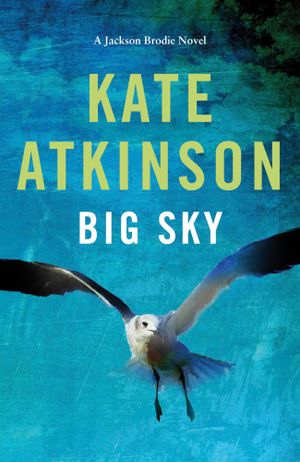 Right there on the cover it says ‘A Jackson Brodie novel”.

But Jackson Brodie is just one circle in an intricate Venn diagram of characters. From the first page, the diagram is proliferating and intersecting wildly. Private investigator Brodie (ex-army, ex-police) is bruised but not beaten by life. He’s moved to a small seaside town in North Yorkshire. His days are spent in undemanding snooping – such as keeping an eye on an unfaithful husband. There’s his teenage son Nathan and elderly Labrador Dido, visiting courtesy of ex-girlfriend Julia. Then there are golfing chums Tommy, Andy and Vince and their wives Crystal, Rhoda and Wendy. Their lawyer mate Steven. Police officers Reggie and Ronnie. Tommy’s son Harry. Drag queen Bunny. Russian sisters Katja and Nadja. Washed-up comedian Barclay Jack. Undercover operative Tatiana. And more.

Big Sky is fast, surprising and amazingly, all the separate threads (different metaphor now, sorry) link these diverse characters. It’s also at times almost comical in its plot contrivances and coincidences. Often it’s just plain funny. All this, in a novel that involves child sexual abuse and sexual trafficking.

I raced through Big Sky. Now I’m determined read back through the Jackson Brodies – Case Histories, One Good Turn, When Will There Be Good News and Started Early, Took My Dog. By the way, isn’t Kate Atkinson great with titles? 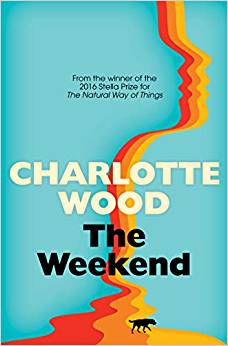 Also read: The Weekend by Charlotte Wood.
Three women, friends since early womanhood, gather to clean out the house of their dead friend Sylvie. They share a long history because they’re all in their seventies.  Jude, now retired, ran a famous restaurant; Wendy is a renowned writer and academic: Adele is an actor, once sought after, now past her prime. It’s a familiar set-up for movies and popular fiction but don’t expect an uplifting Big Chill vibe. It’s not that kind of book.
Wood is a skillful and perceptive writer; her powers of observation are acute and often hilarious; she’s able to skewer pretensions and self-delusions with steely accuracy. There were also a couple of set pieces that had me in awe of Wood’s skill and perception. The hellish drinks party had me squirming but the scene where actor Adele re-experiences the rush – the ultimate high – of access to the spiritual, universal, creative power at the centre of her art is an amazing piece of writing.

I’ve read reviews that praised this novel for its compassion but I have to say I couldn’t find much. Maybe as an older woman (and I must say, one who is delighted to be alive, upright and have a Senior’s Card) I baulked at the many descriptions of the female body in decline. Crepey necks, bulging flesh, aches and pains and weak bladders… However, I suppose the tone of repulsed fascination is an accurate reflection of the way, in our society, we fetishise the young and the beautiful and reject the old.
My colleague at the bookshop loved this novel; I said I found it cruel. I told her, “I just wanted to save the characters from their creator!”
And she pointed out that meant Wood had succeeded at the highest level; I thought Jude, Wendy and Adele were real.