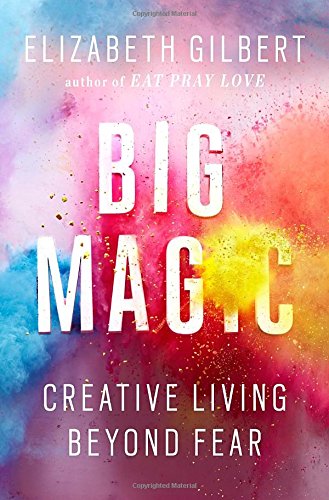 I’m reading Elizabeth Gilbert’s Big Magic, which I thought I’d read before, but maybe I hadn’t, because I thought I didn’t like it, but actually, now –  I think it’s great. Since so enjoying City of Girls and The Signature of All Things, I have a real liking for this writer and I thought I’d give this book another try. So glad I did. It’s full of funny, wise, sensible, utterly relatable advice about creative life.

…We don’t have time for perfect. In any case, perfectionism is unachievable. It’s a myth and a trap and a hamster wheel that will run you to death. The writer Rebecca Solnit puts it well: “So many of us believe in perfection, which ruins everything else, because the perfect is not only the enemy of the good; it’s also the enemy of the realistic, the possible and the fun”.

The most evil trick about perfectionism, though, is that it disguises itself as a virtue. In job interviews, for instance, people will sometimes advertise their perfectionism as if it’s their greatest selling point – taking pride in the very thing that’s holding them back from enjoying their fullest possible engagement with creative living. Their wear their perfectionism like a badge of honour, as if it signals high tastes and exquisite standards.

My big breakthrough as a writer was when I decided to answer that voice that kept speaking over my shoulder. It whispered, or even sometimes shouted, “This is rubbish, this is crap, this is nonsense, this is so so so bad.” I didn’t dispute. I agreed!

And I don’t think I’m going too far to say that “I’m going to finish” changed my life.