ARE WE BEING GOOD ANCESTORS?

I’d been planning to go to the Melbourne Climate Strike today ever since I heard it was on. This time, many adults were going to be there to support the school children. So I’m feeling sad today, as well as sore and sorry, because a nasty little virus had other plans for me. 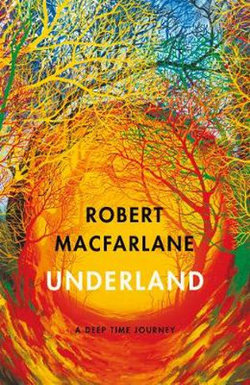 I’ve long been a fan of MacFarlane’s books. Wild Places and The Old Ways had me raving, recommending them to customers, friends, acquaintances, blog readers and just about everyone I knew. The bookshop where I work has these two titles shelved with Travel. But it’s not the best fit. In all of MacFarlane’s journeys there’s an exhilarating combination of adventure, physical challenge and even danger (so much of the latter, at times, that I’ve found myself thinking, “Robert, Robert, for God’s sake, you’ve got kids!”) with his extraordinary range of interests. How does this man know so much about paleontology, history, science, geography, geology, philosophy, mythology, art and literature?
We could of course shelve him in General Non-Fiction but that sounds a bit lame when you think about how much ground he covers.

In Underland, MacFarlane journeys underground. The underland, he writes, holds what we wish to protect, but also what we want to conceal; what we want to extract, but also what we want to lay to rest. He goes down to sites where the ancient dead were buried with love and care. To places where the bodies of people murdered in wartime were dumped, where cars and household rubbish have been tipped, where radioactive waste is buried to wait out the thousands of years it will take until it decays. To mines that spread out far under the earth and under sea,  and into vast caverns and through claustrophobically small underground passages. He explores the invisible city under the streets of Paris, starless rivers in the north-east of Italy, the hollow land under beautiful beech woods and mountains in Slovenia where bodies and relics of both world wars are entombed.

This seems to me the most personal of MacFarlane’s books. He reveals more of his emotions – wonder, joy, fear, anger and above all, sadness – and they are movingly and profoundly expressed. This is especially so in the final sections of the book, where MacFarlane journeys into the fjords and glaciers of the Arctic Circle. Impressively, amazingly, Macfarlane’s words are equal to the awe.

(Reading made me think about my visit to the Arctic Circle, to the town of Churchill on the shores of Hudson’s Bay in Canada. It was spring, and I travelled two days on a train from Winnipeg, though northern forests, then tundra. The Bay was still frozen. The sea, frozen. I stood for hours on a little rise next to the cemetery, staring, trying to comprehend. I saw Inuit people go out onto the ice on motorised ski vehicles. I saw an old man go out with his dog sled; I knew I could have stood on the rise watching that same sight a thousand or more years ago. The sight of a frozen sea was mind-blowing. As in, I couldn’t get my head around it. Stupidly, last year I burned my travel diary of that trip, but I do recall struggling for words, writing along the lines of, ‘I don’t have the language to tell about what I am seeing’.)

I read far into the night, and finished feeling elated by such wonderful thinking and imagining and writing, and also depressed. Are we being good ancestors? Hell, we’re not even being good parents, if it’s the children who have to march and make placards and wave banners.

Dr Jonas Salk, polio vaccine pioneer: In our work, in our policies, in our choices, in the alternatives that we open and those that we close, are we being good ancestors? Our actions, our lives have consequences, and we must realize that it is incumbent upon us to ask if the consequences we’re bringing about are desirable.

1 Response to ARE WE BEING GOOD ANCESTORS?