Hot weather goes on. Attention span slides. Summer reading continues. A delightfully slack day in front of the air conditioner, and I’m nearly finished Liane Moriarty’s latest, Nine Perfect Strangers. Once again I marvel at the clever way she creates a suspenseful, must-know-what-happened bestseller. Nine strangers find themselves together in the Australian country at Tranquillum House for a 10-day well-being retreat. The different characters are introduced, their problems and issues artfully revealed, the tension builds –  I have a feeling the whole thing is about to go off like firecrackers. Really, this is perfect popular fiction (and that’s not a disguised insult) because it’s not mindless forgettable fluff. Within her page-turner she introduces themes that are contemporary, dark and difficult, she makes you think, and all with a light touch.

I am chipping away, on and off, at last year’s Booker Prize winner, Milkman. When I say ‘chipping away’, this is not because it’s tedious or difficult. Or even too depressing (my problem with many of the 2018 book group titles) even though the heroine is trapped and seemingly powerless in a paranoid, dangerous and claustrophobic Belfast during the sectarian and political violence of the 1970s. 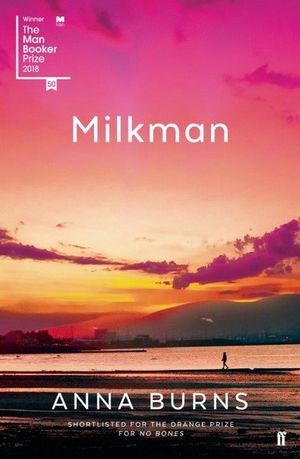 No, it’s more because the language. Or do I mean the style? It’s the voice. (It’s so often the voice!) The interior monologue of the unnamed narrator is dense, thick, full, unstopping, unstoppable, absurd, unpredictable, tragic, hilarious and sometimes just really, really weird. ‘Batty’, was the word one reviewer used. For me, at any rate, this kind of writing takes time. Also – and believe me, this is significant for the amount of time it takes to read a novel – there are no paragraphs, no line breaks, no indents for dialogue. A bit like G W Sebald. Lots of words and nowhere to hide.

“You ask peculiar questions, daughter,’ ma replied. ‘Not as peculiar as those posed by wee sisters,’ I said, ‘and you answer them as if they were normal questions,’ meaning their latest at breakfast. ‘Mammy,’ they’d said, ‘mought it happen that if you were a female and excessively sporty and this thing called menstruation stopped inside you because you were excessively sporty’ – wee sisters had recently discovered menstruation in a book, not yet through personal experience – ‘then you stopped being excessively sporty and your menstruation returned, would that mean you’d have an extra time of menstruation to make up for the gap of not having had it when you should have had it only you couldn’t because your sportiness was blocking the production of your follicle-stimulating hormone, also blocking your luteininising hormone from instructing your oestrogen to stimulate the uterine….

And it goes on. I was laughing out loud at their imagined eldritch little voices. And then, a few pages later, moved at the narrator’s reflections on her dead father’s depression. And a few pages before, astonished at the scene in the evening French class, experienced by the students as threateningly subversive, where the teacher points out to her class that the sky is not blue.