AT THE VILLA TARANTO

How about another voice?

While I was incubating How Bright Are All Things Here, I re-read my mother’s travel diaries and memoirs, and used some of her descriptions as the basis for parts of the novel. She wrote this for a Castlemaine University of the Third Age publication, As If It Were Yesterday, which was published in 2007.

Travels during 1950-52 have provided me with lasting and vivid memories of people, places and happenings in Europe. Some were amusing, others sad, frightening or illuminating but all have remained as pieces of a world that no longer exists. Travel was vastly different then. Nowadays, one can be in London in two days. Then, December 1949. I sailed on RMS Orion from Melbourne to Southhampton, England, a journey that took four weeks. Shipboard life was leisurely, ordered and governed by regular routines. Except for our rare port visits we were isolated in our floating hotel, making the transition from the New World of the South to the Old World we no longer thought of as “Home” but as a place for adventure and new experiences. 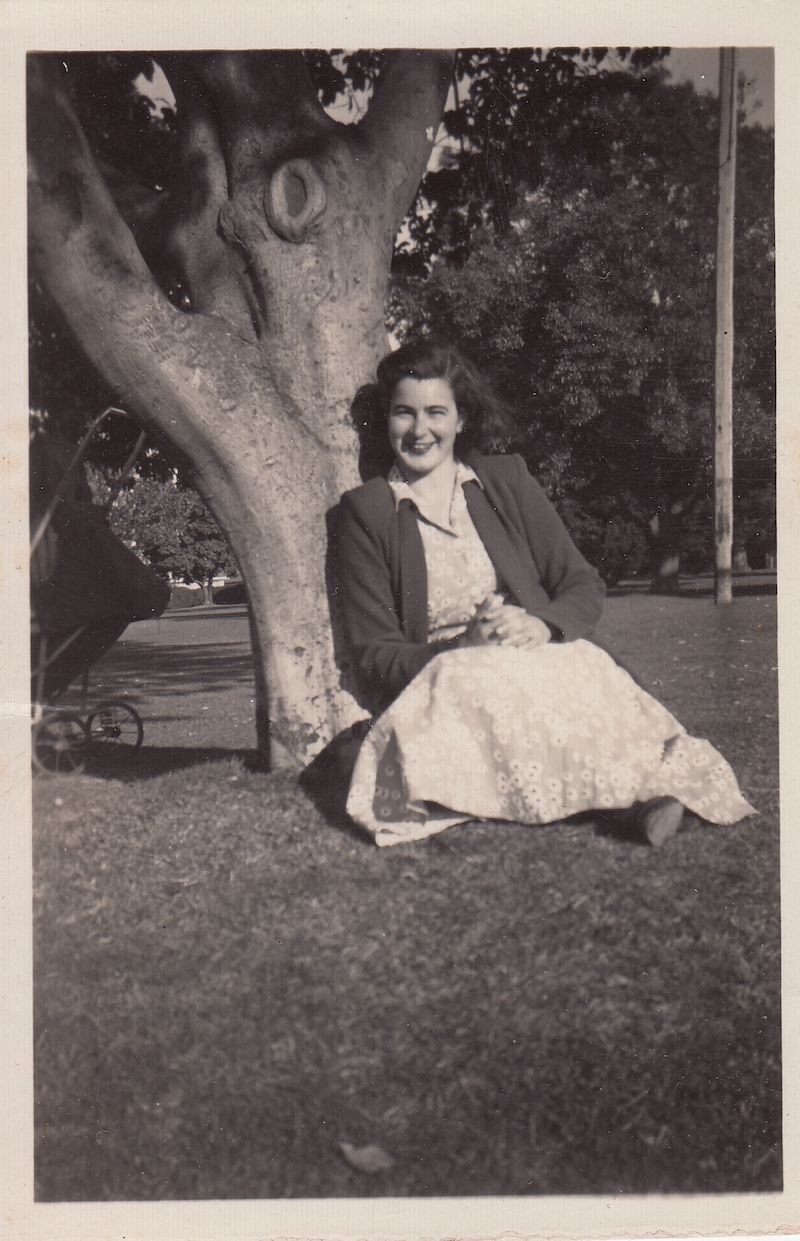 she arrived in London, she and my father married. It was late January. By Spring they were ready to take on Europe. Due to some diplomatic spat between the Australian and Spanish governments, they were denied visas for Spain – at the Spanish embassy, an official threw their passports across the room. They travelled on Eurail passes in Holland, Belgium, Switzerland, France and Italy. Here’s the story of their adventure at the Villa Taranto near Lake Maggiore in Italy.

Soon we left the main line to take a local train that decanted up at the station that served the small town of Pallanza on the shores of Lake Maggiore. We had stopped there to present a letter of introduction given to Douglas by a kindly old gentleman, a friend of Captain Neil McEacharn, a Scotsman with Australian connections, who lived in the Villa Taranto, famous for its magnificent gardens. The writer of the letter, who was a friend of Douglas, had explained that Captain McEacharn was a collector of Australian paintings and that he would welcome any Australian friend of his.

We found accommodation for the night in a small trattoria, clean and inexpensive. The proprietor’s wife, a little plump nut-brown woman, was worried by our ignorance of the Italian language. She took it upon herself to remedy this, bustling in and out of the dining room with various objects. At one time it was a lemon. ‘Lemoni’, she said, and we repeated the word. So it was with bread, milk, meat, knife, fork, cup, plate. She pointed to the furniture, table, chair, cupboard. When she took us upstairs to our room, she pointed to the large double bed. ‘Letto matrimoniale,’ she said proudly. With her help, we gained a useful vocabulary.

Next morning after breakfast and another language lesson, we set out to explore the town and eventually made our way to the Villa Taranto. Though the open gates we could see a well kept but modest house. We walked towards it and were met by a woman who asked what we wanted. We told her and she said, ‘The Captain is not here but at the Villa.” This was the lodge-keeper’s house. She took us up the very long drive bordered by well-kept garden beds. When we came to the Villa she said, ‘The Captain is a very important man. People come from many places to see him. The Princess Margaretta stayed here last week. You must not expect the Captain himself to speak to you. He may send his secretary.’ When we reached the Villa, she gave us into the care of a servant who took our letter, motioned to us to wait and disappeared.

Sitting on a garden bench nearby were two people, also waiting. They were, we learned, an English bank manager and his wife, also with a letter of introduction. By this time we had decided that we would wait until the servant reappeared and then leave. But almost immediately a very superior servant came to take us to where a car was waiting. A man attended by several servants in black and yellow livery came out of the Villa and he too moved to the car. He greeted us warmly. It was the Captain. He was, he said, delighted to hear from his old friend, and wished to learn more. He added that unfortunately he had to leave now but would be back in the late afternoon. And of course we would stay over night with him. We demurred, saying we had made arrangements in the town. ‘That will be taken care of. I have given instructions – and Donald will entertain you.’ Then he was driven away.

And we were taken care of, driven to our little trattoria where the proprietress was over come that her guests, the ones she had looked after, were to stay at the Villa. We were farewelled with tears and blessings, almost I thought, with instructions on how to behave and with the neighbours ranged on the pavement.

Back at the Villa, Donald Friend took care of us. Douglas and he knew each other. Donald explained he was there to paint a rare Chinese plant that was about to bloom. The afternoon passed pleasantly, walking in the garden and talking. There was more conversation when the Captain returned and then we all retired to dress for dinner. With our limited resources our preparations were simple. Douglas changed his socks and I brushed my hair. Dinner was formal –  a line of servants against one wall; a servant behind each chair. the food was superbly cooked and presented. ‘Everything,’ said the Captain, ‘was produced on the estate, even the liqueur.’ Conversation flowed – gardens, paintings, politics, the future of the garden, which was to be a gift to the Italian people.

At last after more talk we retired to our room, where we broke into hysterical laughter. A carved bed, a 16th century Madonna and Child and an antique crucifix on the walls; heavy antique furniture, curtains pulled against the night air, a balcony giving a view over the gardens. There was a knock at the door. A yellow and black liveried servant required Signor’s pantaloons – to brush and press – and asked us to put our shoes outside the door so they could be collected and cleaned. We slept well and comfortably that night. Next morning, after breakfast and a detailed tour of the garden we were driven well on the way to Milan, to a station where, without delay, we caught a mainline train to our next destination. 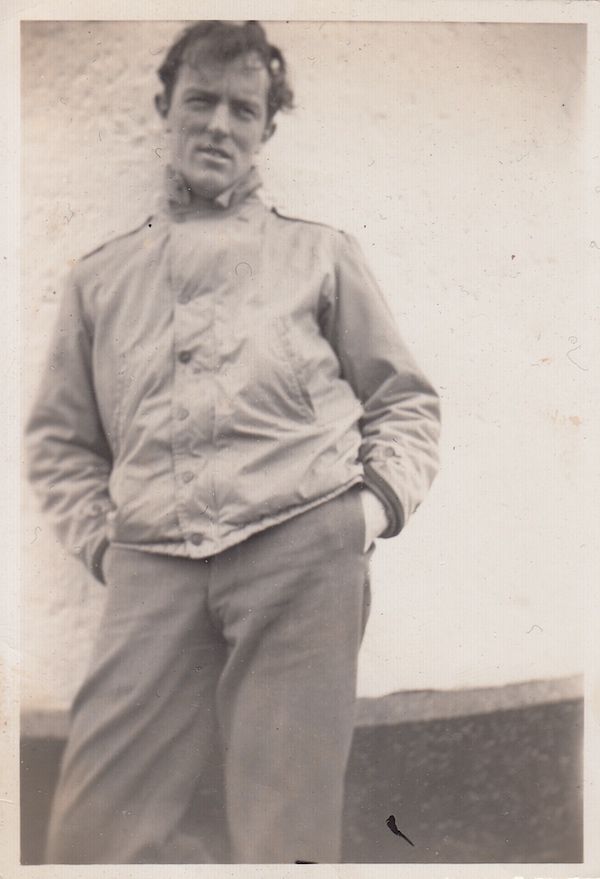 Dad told me that he felt very insecure with his pantaloons gone – they were his only pair! This visit to the Villa Taranto seems an extraordinarily rich experience for young people from the Melbourne suburbs. Unusually for a young middle-class married couple at the time, my parents were back-packing. They travelled by train and bus, occasionally hitched, but mostly walked. They stayed in Youth Hostels and cheap hotels and guest houses; a few times they slept in stations and under bridges –  and even once or twice in cemeteries.