Yes, British crime is my guilty little not-so-secret. I love it. And I can be quite productive, too – two or three nights in front of a movie length episode and I can knit a couple of beanies or a cowl (with cables).

But there’s a worse confession to come.

I’m hooked on Seinfeld. I never watched it regularly back in the day (it ran from 1989 to 1998) but the discovery of a boxed set in an Op Shop for a paltry eight bucks has led to quite an addiction. I could argue – I will, dammit! – that a well-made sitcom can be a beautiful thing. It’s both astonishing and inevitable when all the disparate plot elements converge; watching the end of the ‘Fusilli Jerry’ episode of Seinfeld the other night, I felt like cheering “Bravo!” as sex moves, a motor mechanic, the wrong license plate, an eye job and a fusilli pasta sculpture all came together with a bang at the proctologist’s office.

Actually, there’s more, and I’m blushing somewhat. It’s Sex and the City. I don’t know quite what to say about my current thing for this show. Though I must have seen the odd glimpse, I never watched an entire episode in its day (1998 to 2004) and in fact would have snottily labelled it as ‘trash’ if I’d been asked for an opinion. One of my worst movie experiences ever (on a par with Twilight, where I was quite audibly muttering “Let it be over, let it be over” for the last hour) was Sex and the City on the big screen. It was a fundraiser for breast cancer at our local theatre, a women-only event full of squeals, giggles, air-kisses, pink, pamper-packs, frocks, heels and flutes and flutes of bubbly. I may have been going through a particularly dour and kill-joy phase, but I hated everything about that night. But now I am appreciating the female-centered stories, the gorgeous friendship between these four very different women as they drink their Cosmoplitans, and – yes – the clever writing.

So, that’s the set-up for this episode. Things will converge. You’ll see. Here goes. 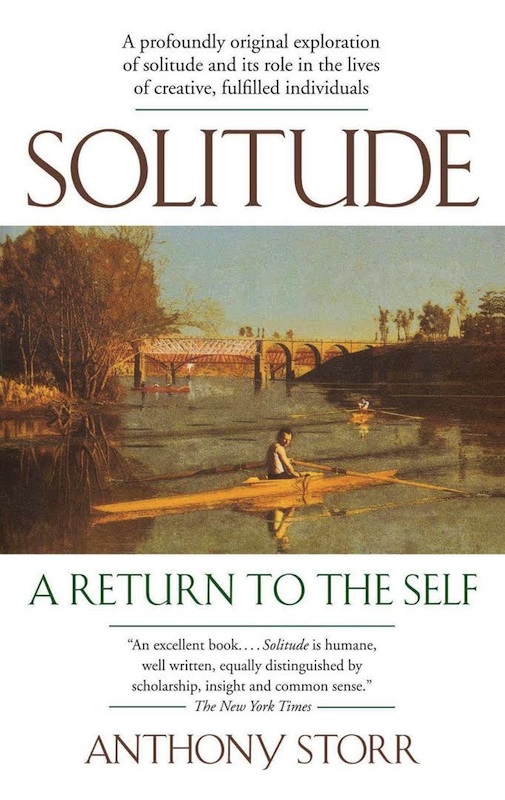 I recently re-read Anthony Storr’s Solitude. Storr was a British psychiatrist and author; this book, originally published in 1988, is a challenge to the idea that it’s only through interpersonal relationships that a person can find fulfilment, happiness or indeed, become a psychologically healthy human being. He looks at creative people – writers, composers, artists and so on – to show that work can truly be, if not ‘the’ then certainly ‘a’ love of your life. And it’s not just the extraordinary people he talks about. Though it’s common to mock ‘anoraks’ and nerds, solitary hobbies and interests – ranging from stamp collecting to pigeon fancying to gardening and fishing – sustain many productive, happy, fulfilled individuals who do not have spouses, families or intimate others. They may or may not even have close friends, but they are not to be pitied or pathologised. These people have found a way to living their own lives. But there’s an enduring bias and suspicion against people who prefer solitude – against introverts, you could say. Storr passionately defends such people – talented, genius, and not so. They have a right to simply be themselves. And they often bring great gifts into the world.

It’s a fascinating book, and my only disappointment with it is that so few of his examples are women. Beatrix Potter and a few saints get a guernsey, that’s all. For women and solitude is a huge topic. I think I can safely say that – in general – you need solitude to create. I’ve even seen writing described as ‘the art of the room’; if you can’t bear to be alone, it’s not for you. And yet women, because of socialisation, cultural norms, their roles as care-givers and mothers and perhaps also their physiology (those tend-and-befriend hormones) and their genes, seem to be set up for very little alone time.

Solitude made me want to re-read more recent companion or complementary book – Susan Cain’s 2012 Quiet; the Power of Introverts in a World That Can’t Stop Talking. And there’s where worlds began to collide. And the disparate plot points converge…

Cain’s description of the American extrovert ideal gone wrong matches….Donald Trump! And in my last night’s episode of Sex and the City one of the girls going into a swanky restaurant spied – guess? Yes! The Donald. (I agree, it’s not quite as neatly amazing as Fusilli Jerry, but I thought it brought a few very disparate elements together).

But on to more serious matters. That the President of the United States can be a movie actor or a reality TV star or a celebrity says something important about the United States. Cain explains that, beginning in the 1900’s, industrialisation began to change the culture. ‘America had shifted from what the influential cultural historian Warren Susman called a Culture of Character to a Culture of Personality… In the Culture of Character, the ideal self was serious, disciplined and honourable. What counted was not so much the impression one made in public as how one behaved in private…But when they embraced the Culture of Personality, Americans stared to focus on how others perceived them. They became captivated by people who were bold and entertaining… Susman famously wrote, “Every American was to become a performing self.”

The American extrovert ideal, according to Cain, has come to mean that quiet has become unacceptable. The gifts that the introvert may bring to the table –thoughtfulness, consideration, focus, insight – are not wanted. Put simply, the vocal, gregarious, fast, assertive, decisive person (dare I say, that’s it’s usually a man?) is perceived to be a better leader and decision-maker, more intelligent and more able. There is plenty of evidence that this is not the case. They may even make worse leaders – rash, impulsive, big on style, short on substance. Hello, Donald.

So here you have it – British crime, beanies, sit-coms, solitude, American cultural history, …and  Trump! Reminds me of a little game I used with creative writing students years ago. I’d put a bunch of random nouns on slips of paper into a hat and get them to draw three, then write a story.

If only the Performing President was fiction.