I needed a novel for another train trip, so this time I picked something I’d read long ago. As is often the case, re-reading was even better.  And as Fifth Business is the first of a trilogy, I have a lot of reading ahead of me on this long weekend.

It begins on a winter’s day  in 1908 in the small town of Deptford in Ontario, Canada. Two schoolboys are coming home from sledding in the snow. They’ve had a quarrel, and one of them – Percy ‘Boy’ Staunton, the son of a wealthy family – throws a snowball with a small rock in the middle of it. It’s meant to hit Dunstable Ramsay – but he ducks, and what happens next reverberates through Ramsay’s entire life.

It’s a magical novel – wildly inventive, funny, rich, strange, complex –  taking in small town life and morals, business, politics, war, teaching, religion, myth, art, theatre, sex, magic, guilt, love, responsibility… Especially responsibility. Because the snowball – thrown in a typically childish moment of thoughtless cruelty – hits Mary Dempster, the pregnant wife of the town’s Baptist minister. Robertson said of the novel: “I began it because for many years I had been troubled by a question:to what extent is a man responsible for his actions, and how early in life does the responsibility begin?”

In his introduction to my Penguin Modern Classics edition of The Manticore (the second of the trilogy) M G Vassanji writes: We are all responsible for our actions, even as children, the book suggests: no, it proclaims. Our deeds bear consequences, trivial or profound, and we are accountable… But while we may not be judged by a higher court – parental, religious or state – we may judge ourselves. And that is what Ramsay does: he did not throw the stone, but he moved aside and it hit someone else who suffered instead. 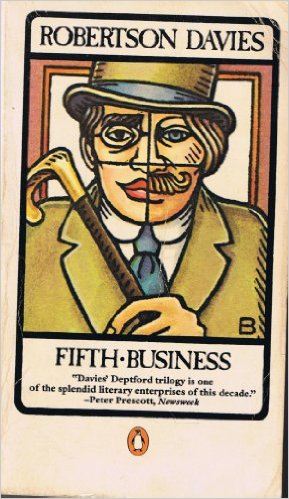