A SONG FOR ELLA GREY 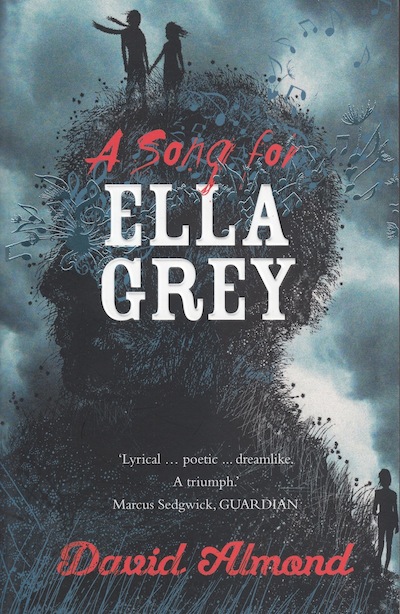 I’m in love with this book and I haven’t finished it yet. I’m deliberately not finishing it because I love it so much. Does that make sense? Probably not!

I have only fifty pages to go. Perhaps tonight, instead of watching a DVD (I am obsessed by Inspector Morse, poor sad thing that I am) and knitting, I will read…

One of the problems is that I know how it ends. Not because I have read the ending – which is something I do; it’s horrible, I know and my son can’t believe that I do it but sometimes I just can’t help myself – but because David Almond has based this book on the Greek myth of Orpheus and Euridice.  But really, knowing the story behind the story is neither here nor there; A Song for Ella Grey is a thing of its own. It’s a beautiful thing, dreamily poetic and oddly real.

In the early part of the book, narrator Claire tells how her group – North of England of teenagers wanting a getaway from exams and school and stress and winter – go on a camping trip to the beach.

SO this, we said. We’ll make our own Italy. We’ll make our own damn Greece. Where? In Northumberland, of course, We’ll go the first chance we get, in the Easter holidays, in Spring. There should at least be a bit of sun by then. If not, we’ll just pretend there is. We’ll go to the beach for a whole damn week. We’ll get the bus, or we’ll hitchhike there. We’ll take tents and sleeping bags and camp in the dunes. We’ll take guitars and flutes and tambourines and drums. We’ll take a couple of massive pans, a ton of pasta, gallons of pesto, a thousand tins of tomatoes We’ll take a binbag of frozen bread. We’ll save up and stock up on boxes of Lidl chianti and Aldi chardonnay…We’ll light bonfires and have beach parties every night… We’ll forget about anticipated grades and adjusted grades and passes and fails and averages and stars and all the stupid boring bliddy stuff that stops us from being us…

Claire’s best friend Ella, over-protected by her adoptive parents, isn’t allowed to be there. But when a young man called Orpheus arrives on the beach, and plays for them, Claire knows she must share the music with Ella. She calls her, holds up the phone to the air and Orpheus’s song plays for Ella.

‘Just listen,’ I whispered.
I held out the phone towards him.
‘Oh God,’ I gasped, as I saw the birds coming down from the sky to the beach, as I saw the seals lift their heads from the sea, as I saw from the corner of my eyes the adders slithering down the sand to us.
‘Ella,’ I breathed. ‘Even the snakes are listening.’

I know how it ends, but I think I’d better get reading, now.