A TIME OF GIFTS 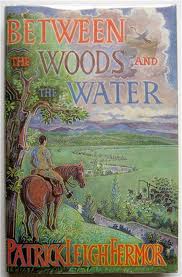 I’ve been going places with Patrick Leigh Fermor. He is the most delightful travelling companion; interested in history and art and architecture and plants and birds and clothes and popular songs and cloud formations and politics and cigarette cases and love and water buffalo…actually, in everything.

The remarkable story behind these remarkable books – A Time of Gifts, Between the Woods and the Water and The Broken Road (which was left unfinished by the author’s death; it was edited by Colin Thurbron and Artemis Cooper and published last year) is…well, remarkable. In 1933 at the age of 18, Patrick Leigh Fermor set out from England to travel on foot from the Hook of Holland to Constantinople. More than forty years later, he published the first book, A Time of Gifts. I’ve been reading a little about Leigh Fermor (I think that’s correct, though I think of him as ‘Paddy’, which is what his friends called him) and it seems that most of the time he wasn’t working from old diaries or notes; he was writing from memory. Remembering…or recreating? Just because I can’t remember in such detail doesn’t mean no-one can, but it is a phenomenal accomplishment to (seemingly) capture the fresh gaze of a very young man so in love with life that everything he looked at – or so it seems – was turned to gold. 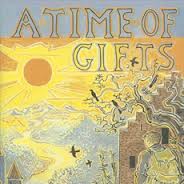 I have opened a page at random and copied out a couple of random paragraphs.  All  through the first volume, and now reading this, the second, I’ve kept sighing and telling whoever will listen that it is almost too beautiful to bear. Deliriously beautiful – and sometimes pretty much delirious –  and though I thought I would mark  pages or underline or copy out this or that wonderful sentence – I haven’t done it. But simply opening a page at random does the trick, I think.
This is high summer in rural Rumania, and Leigh Fermor is staying – as he did all over Hungary and Rumania – with the friends of a a friend of a friend – in their kastely (manor house) which is in the middle of farmland.

Waggons creaked under loads of apricots, yet the trees were still laden; they scattered the dust, wasps tunelled them and wheels and foot-falls flattened them to a yellow pulp; tall wooden vats bubbled among the dusty sunflowers, filling the yards with the sweet and heady smell of their fermentation…

And still at the same place, sitting up with Istvan,his host, into the small hours of the morning, smoking and drinking and talking.

Just past its full, the moon laid a gleam of metal on the river and a line of silver wire along the tops of the woods. The July constellations and the Milky Way showed bright in a sky empty of vapour and as the moon waned, stars began to shoot, dropping in great arcs, sometimes several a minute, and we would break off our talk to watch them. They were the Perseids, meteors which shower down late that month and in early August, from the bell- or flower-shaped constellation of Perseus, where Algol blinks among minor starts with a restless flash. El Ghul -the Ghoul or Fiend – is the Arabian astronomers’ word for the Gorgon, and the starry hero, grasping the snake-locks, flourishes her head across the North and shakes the fragments loose; or so we decided after a decanter or two. If we were late enough, nightingales filled in the rare gaps in our talk; the Pleiades and then Orion followed the slant of Cassiopeia and Perseus above the trees.

I am sighing again as I type. A beautiful (that word again) lost world, beautifully remembered, recreated, created… It doesn’t really matter, does it? I wouldn’t even care if it was totally invented. I just love travelling with Paddy.