We have streaming service BritBox now, so we’ve been bingeing on British crime and comedy. When I had a few days to myself, I also indulged in re-watching the literary adaptations the Brits are so famous for. I started with the 2007 version of my best-beloved Austen novel, Persuasion. There was a lot I liked. Penry-Jones’s Captain Wentworth looked and sounded just right. The contrast between the Wentworth’s circle and Anne’s appalling father and older sister was delicious. But Hawkins’ Anne – for me – was all wrong. She is described somewhere in the book as ‘an elegant little woman’ and Hawkins – with her open, eager, expressive face –  is not.  And whoever thought it was good idea to have her running (and running…and running…) through the streets of Bath, disheveled and without her bonnet (shock, horror!), in search of  Captain Wentworth?

Out of curiosity,  I searched out the 1971 version on You Tube.
Ann Firbank played Anne; Bryan Marshall played Captain Wentworth. This Anne is composed and elegant but I found it hard to discern the yearning and loneliness that make this character’s late-blooming love story so poignant. The drama was muted, in part because the production pulled back on vapidity, vanity and snobbishness of Sir Walter and Elizabeth Elliot. These two were not the truly horrible human beings of Austen’s book. I felt like laughing gently at them rather than loathing them. Not nearly as satisfying. 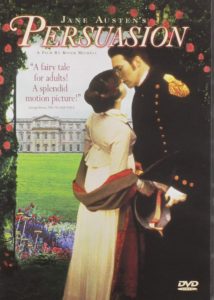 The 1995 Persuasion with Amanda Root and Ciaran Hinds on DVD completed my research.
Root’s Anne radiates intelligence and self-awareness. She meets her family’s neglect and stupidity with forbearance and kindness – though she is no pushover – and she faces loneliness with grace and dignity. She hides her loneliness and yearning; she is confident and competent in her care and kindness for family and friends; and her slow blossoming as she makes new friends who appreciate and love her is quite moving. It is a “dark” production. Unlike the other two which are light and sparkling, rooms are dimly lit, the costumes look like clothes that have been worn, and Hinds’ Captain Wentworth is serious, mature and craggy rather than handsome.

Also, unlike the 2007 version, this one was true to the understated passion of the book’s closing chapters. There’s a scene in which Captain Wentworth listens as Anne and Captain Harville talk about love, constancy and gender roles.
Captain Harville tells Anne that “all histories are against you, all stories, prose and verse.”  “Men have had every advantage of us in telling their own story,” Anne responds. And says, finally, to end the argument, “All the privilege I claim for my own sex…is that of loving longest, when existence or when hope is gone.”
This is when Captain Wentworth writes Anne a beautiful letter.
I can no longer listen in silence. I must speak to you by such means are within my reach. You pierce my soul…
Sigh. 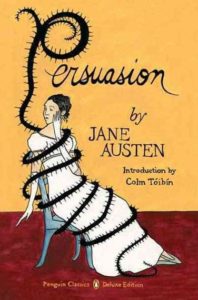 And there’s now yet another version, just out, which stars Dakota Fanning as Anne. I’ve been reading reviews and they are almost universally bad; the UK Spectator’s reviewer reckons everyone involved should be sent to prison! Anne as a Bridget-Jones style desperate singleton, crying in the bath and drinking wine from the bottle? Please, no!
I know I will probably give in to curiosity and watch it eventually, but for now, I am re-reading the book.

1 Response to PERSUASION ON FILM