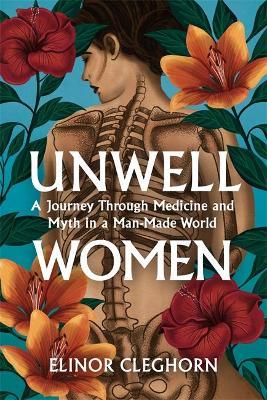 Elinor Cleghorn, an English scholar, researcher and writer, has written a must-read book about how Western medicine has failed women…but it’s almost unreadable. For me, anyway. Not because it’s badly written – not at all – but because the subject is just so damned upsetting and infuriating!

It starts badly in ancient Greece.  The male body was the standard and thus women’s bodies (and it follows that women themselves) were defective. Especially when the poor things were defined and dominated by their wombs, which bizarrely the ancients believed could wander all over the body wreaking havoc on a woman’s health.
It got worse over the centuries, with normal women’s bodies seen as dangerous to themselves and to men. If you weren’t properly submissive and docile you were likely to be punished. Witches were burned, ‘hysterics’ confined to madhouses,  menstruation and menopause defined as illnesses and an excuse for denying women education and political rights, the control of their own destinies, property and bodies. The sections detailing surgery to remove the ovaries or clitorises for troublesome women and girls were so shocking that I had to skip over the details.
The 20th century saw many advances in science and medicine, but for women, not such a great improvement. The myth of the ‘wandering womb’ faded away, but ‘hormones’ as a catch-all diagnosis meant women’s pain and suffering was still too often not listened to or properly investigated. Even into the 21st century, a male-centred medicine lets women down in so many ways. The average time for a woman to get a diagnosis of endometriosis is seven years and women with chronic pain are still prescribed anti-depressants instead of pain relief. It’s unfair, infuriating and deeply frustrating to be patronised, fobbed off and disbelieved. I know, I’ve been there, and so has Cleghorn. After many awful years of struggling to have her symptoms recognised, she was finally diagnosed with an autoimmune disorder.
The book is full of stories not just of suffering females, but of the many brave and revolutionary women who have fought and succeeded in challenging Western medicine to change.

Cleghorn writes, “Medicine must hear unwell women when they speak – not as females, weighed down by the myths of the man-made world, but as human beings. Medicine must listen to and believe our testimonies about our own bodies, and ultimately turn its energies, time and money towards finally solving our medical mysteries. The answers reside in our bodies, and in the histories our bodies have been writing.”