THE TRIP TO ECHO SPRING 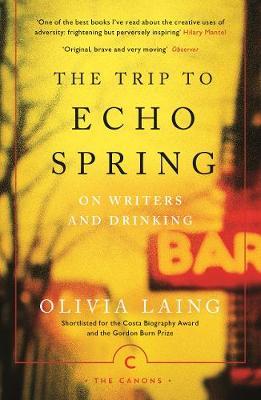 I chose this one at random from the library shelves because I liked the main title, not stopping to read the sub-title.
Writers and drinking?
Not really interested; and if I had clocked the fact that they are all American, and male, I probably wouldn’t have borrowed it.
After all that, I couldn’t put it down and read it in a day. Which just goes to show.

Olivia Laing’s book is a beautiful hybrid. It’s got elements of memoir, travelogue, biography and literary criticism, as well as a serious investigation of alcoholism. Laing, an English writer, criss-crosses America, often on trains, in search of F.Scott Fitzgerald, Ernest Hemingway, Raymond Carver, John Cheever, Tennessee Williams and John Berryman. She visits cities and towns, houses, neighbourhoods, landscapes. She does the Tennessee Williams tour of New Orleans and travels all the way up to the wild country near Port Angeles in Washington State, just over the water from Vancouver Island, to Cheever’s grave. These famous men, all with blazing talent, led harrowing lives; two committed suicide and the rest of them died sooner than they should have. Not to mention the collateral damage to lovers, wives, children and friends. Which sounds gloomy, but in her hands it’s fascinating. With curiosity and compassion she shows the vulnerable, fragile, complex human being beneath the genius. The link between dysfunctional families, disturbed, unhappy childhoods and addiction is tragically clear. When eventually Laing reveals her own experience of living with her mother’s alcoholic partner, the end – where she travels with her mother in Washington State – gains depth and creates a kind of resolution.

One mystery. Where, exactly, is Echo Spring?
In Tennessee William’s Cat on a Hot Tin Roof, ‘a trip to Echo Spring’ is Brick’s visit to the liquor cabinet. It’s his favoured brand of bourbon.

1 Response to THE TRIP TO ECHO SPRING