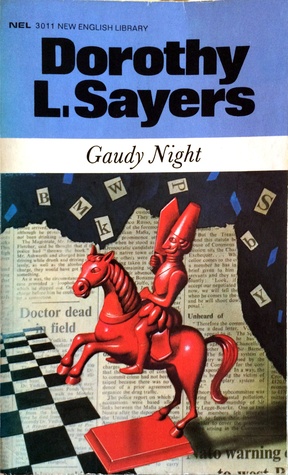 After finishing Square Haunting by Francesca Wade, I decided to look up some of Dorothy Sayers’ Lord Peter Wimsey mysteries. I remembered Gaudy Night was one of my mother’s favourite detective novels so I decided to start there, near the end of the series and not at the beginning.

It’s the mid-1930’s, and detective novelist Harriet Vane arrives in Oxford for a ‘gaudy’ (a college feast or reunion) at Shrewsbury, her old college. Scarred by the publicity and scandal of her murder trial (see Strong Poison), she’s reluctant to go…but once she’s there, she finds herself back under its familiar spell. Harriet rediscovers Oxford; the mellow old buildings, the river, the streets and shops. She also renews her love for the university, the institution; the traditions of scholarship and learning and ‘the life of the mind’. She wonders if she could insulate herself from the worries of the world, and become a scholar…
But (since this is a detective novel) she also finds herself in the middle of a mystery. Someone in this all-female community has been sending poison pen letters and committing minor acts of vandalism. Is it a member of the staff (‘scouts’), a student, an academic?
This book was written in the 1930s, when women’s demands to participate in higher education still met with resistance. Female academics and intellectuals were commonly caricatured as unlovable and unfeminine, if not downright bitter and twisted. (Well, why not be bitter? Oxford did not admit women to full academic status until 1921 and Cambridge – can you believe it? – not until 1947!). It soon becomes clear that Shrewsbury College’s female intellectuals are the targets of an anti-feminist who wants to cause a scandal in the academic community. With the attacks becoming nastier and more frequent, Harriet is asked to investigate. Eventually, she turns to Lord Peter Wimsey, her friend and unsuccessful suitor, for assistance. In its final pages, the mystery is tragically solved and Harriet and Peter find each other at last.

Back to my mother. As I’ve aged,  I’ve come to see her in a different light (like, she was a person!). Yes, she was strong, stoic, intelligent, self-disciplined, brave – quite the feminist icon. She was also – if I read her rightly –  a raging romantic. In my youthful self absorption, I’d missed that. Gaudy Night is both a mystery and an achingly romantic love story.  It’s the book where Harriet (at last!) realises that Peter is her soul mate. And he, after years of fruitless courtship, gets his heart’s desire. The scene on the riverbank, where Harriet studies Peter’s face as he sleeps, had me reaching for my (metaphorical) fan. Hot! and yet with nothing explicitly sexual.