It seems a long time since I sat down to write here. More than seems, actually. Is.

The last time I posted was at the beginning of September. Though I was reading (I’m never not reading) my head was elsewhere because I was gearing up for 38 days of holidaying in Canada. My husband’s long service leave, combined with 25 years together –  plus my 60th birthday earlier this year –  formed great reasons to splurge. Maps, flights, train tickets, car rentals, insurance, accommodation, packing, connections with friends – it was a glorious project, and all consuming. And now it’s over. We returned home nearly two weeks ago, and at last I feel as if all of me has finally arrived.

There seems to be so much to do, but I’m resisting panic. Even though the garden is feral, the house is dusty and disorderly and there are piles of stuff everywhere, I’m trying to keep breathing and enjoy our homecoming. Canada is so green (and gold and orange and red, because we were there for Autumn), so watery with myriad lakes and rivers, so Northern, so different. I’m noticing – really noticing – the different blue of the sky, the shape of our trees, the colour of our greens. Australian accents (including my own) were beginning to sound outlandish, and now they’re normal again.

This year, in one of my regular purges, I burned my travel diaries from 1991 when I spent four months in Canada, ranging right across the country from Vancouver on the West Coast to Nova Scotia on the East. I now wish I hadn’t, because I’d love to compare my observations and experiences. Though I didn’t keep a diary or even any notes this time. I took a blank book with me – I thought I would – but it seemed so pleasant to just experience each day and then let it go. I regret the burning, and regret – just a little – not writing anything down, but you know what? So what. I’ve done (or not done) it now. 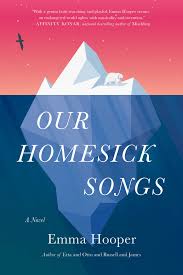 I read a lot while travelling. I bought a couple of books and then gave them away, but then there was the Kindle. I’ve always been a bit opposed, loving the physical book as I do, but for a reader on the move, it was fantastic. I loaded the complete works of Jane Austen, Anthony Trollope and Charles Dickens –  a clear case of panicky stockpiling –  but of course didn’t read them all.  I’m not that voracious, and I think you’d need a round the world in twelve months to get that lot under your belt. But I got through Pride and Prejudice, Mansfield Park and Persuasion. And a few Canadian novels, too, which I’d bought before I left to get me in that Canadian mood. There was some crime fiction, which I consumed and then forgot, and a more memorable book called Our Homesick Songs by Emma Hooper.
The Connor family lives in Big Running, Newfoundland. The cod fishery has collapsed (this really happened) and with no fish, the town’s reason for existing is gone. Parents Aiden and Martha alternately work away and look after the children, connecting only for a few brief hours each month. The disconnection, loneliness and strain begin to eat away at each of them. Meanwhile, the government wants the residents to abandon Big Running and relocate elsewhere; to that end it begins to shut down the town’s services. Feisty and determined 14-year-old Cora takes matters into her own hands (I won’t tell you how) but it’s 10-year-old Finn whose off-beat solution will have you between laughter and tears. Told in simple, almost fairy-tale prose, it’s achingly sad but uplifting, too. Love doesn’t conquer all, but it surely helps.

2 Responses to LONG TIME NO SEE