GIRL WHO DRANK THE MOON 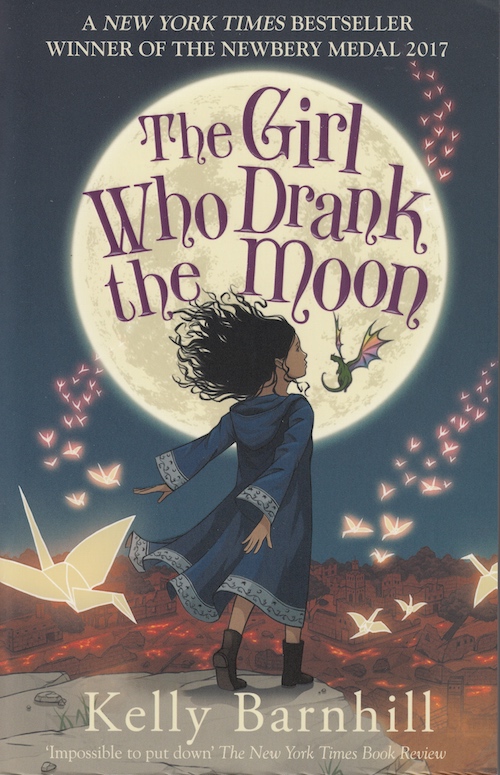 Kelly Barnhill’s The Girl Who Drank the Moon was winner of the Newberry Medal in 2017. Here’s what the blurb on the back says.

Every year the people of the Protectorate leave a baby as a sacrifice to the witch that lives in the forest. But the witch, Xan, is a kind one. She rescues the children and delivers them to welcoming families on the other side of the forest, nourishing the babes with starlight on the journey. But one year Xan accidentally feeds a baby moonlight instead of starlight, filling the ordinary child with extraordinary magic. Xan decides she must raise this girl, who she calls Luna, as her own. As Luna’s 13th birthday approaches, her magic begins to emerge – with dangerous and thrilling consequences.

This is, apart from anything else, a fabulous demonstration of world-building. I have this issue with some fantasy stories – and my husband laughs at me – I call it the “market garden problem”. When we watched the Lord of the Rings movie, I objected to Rohan, the home of the horse lords. It sits right in the middle of nowhere – and there appeared to be no market gardens. So where did they get their vegies from? In this book, though there are many magical elements, everything makes sense. There are (so to speak) market gardens. The witch Xan and her friends are strong and lovable characters; Luna is a gifted, exasperating, loving heroine; the large cast contains some memorable villains. This story brought tears to my eyes (which doesn’t happen very often), made me laugh and kept me guessing. There are multiple plot-lines that twist and twine and eventually all come together in a surprising and satisfying finale. A coming-of-age story that talks about good and evil, love, family, belonging and growing up and growing old. Beautiful.