I was talking yesterday to a friend who’s confined to bed in a hospital ward with a few tubes and wires stuck into her to treat a major infection. She’s a serious, intelligent woman who always reads serious and intelligent books, but she confessed that at the moment, she just can’t. She’d never really been able to understand why anyone would want to read ‘fluff’ – popular fiction, ‘women’s fiction’, light fiction, whatever you want to call it –  but now she does. It’s soothing and undemanding. You don’t have to concentrate unduly. You know everything will turn out in the end.

My book club title for this month is Burnt Shadows by Kamila Shamsie. It begins in Nagasaki, three days after the bomb was dropped on Hiroshima. I started it a week ago, but after only 16 pages of beautifully written prose, I was feeling breathless and oppressed. This wasn’t going to end well. I’m not in hospital, but I knew that this is one of those times when you just have to go lighter.  Our group meets this Tuesday, and I will have to front up without having completed the book. 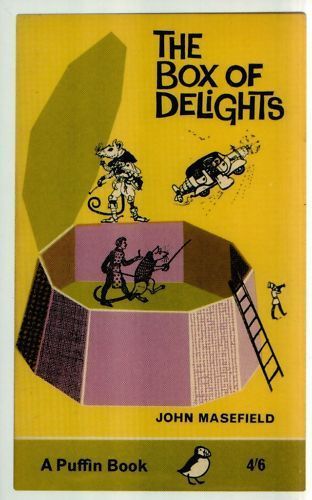 I’ve turned instead to junior fiction. In a recent blog post, Kate Constable wrote about The Midnight Folk (1927) by John Masefield. This book is an old favourite of mine. I don’t know how many times I read it when I was a child; one summer, when I was around eleven, I tried to re-write it with a little girl instead of a boy as the main protagonist. Kate commented that she wasn’t sure that it would appeal to a modern audience; the plot is convoluted and confusing, and even though it’s quite humorous, she thought that children might have to be led through some of the jokes. Even though I love this book to bits, I quite agree. Kate also noted that some elements – such as transformation into animal form, comic/scary witches and talking portraits – predate later children’s classics by TH White, Roald Dahl and JK Rowling.

I thought about reading it, but since lately I’ve become a bit wary of re-reading beloved childhood books (feet of clay, fallen idols, all that stuff) I decided to skip on to its companion book, The Box of Delights (1935). I never obsessively re-read this one and so it wasn’t lovingly engraved in memory. Actually, I may well have skimmed long sections, because on this re-reading, the first in at least 30 years, parts of it seemed entirely fresh. And utterly delightful in its own eccentric and unpredictable way.

A brief summary doesn’t really indicate all that is within this magical box. But here goes… Kay Harker, on his way home from boarding school for the Christmas holidays, encounters an old Punch and Judy man called Cole Hawlings at the railway station. Cole later performs for Kay and his friends Peter, Jemima and Maria at Kay’s home, Seekings. And there, Cole tells Kay that he’s being pursued. Is it by wolves, criminals, or the forces of evil? It’s not clear. Desperate to evade his enemies, he entrusts Kay with his ‘Box of Delights’. It’s only a shabby little thing, but it enables Kay to magically ‘go small’ (shrink in size), ‘go swift’, and journey into the past.

The plot then explodes all over the place. There are encounters with philosophers, magicians, Roman soldiers, Renaissance alchemists, talking animals and mythical beings like the Celtic hero Herne the Hunter. Gangsters pilot futuristic flying cars and the cast of police and village people wouldn’t go astray in a Miss Marple mystery. To top it all off, Kay’s old enemies Abner Brown and Sylvia Daisy Pouncer, mixing witchcraft with criminality, plan to stop the Christmas celebrations at Tatchester Cathedral by a mass kidnapping of clergy and choirboys.
My favourite parts were where, using the box, Kay slips into the deep past. There is a genuinely gripping and scary scene where he helps a band of Bronze Age herders defend their hilltop camp against marauding wolves. And another where, escaping from the sack of Troy, Kay is at first rescued by pirates and then cast by them onto a deserted island.  After many adventures, Kay defeats greed and dark magic, releases the kidnapped clergy, and Christmas – with presents and feasting and carols and a midnight mass at the Cathedral – goes ahead after all.

Like The Midnight Folk, I don’t think The Box of Delights would stand a chance of getting published today. Too long. Too complicated. Too uneven in tone. Too much. And I loved it.

…reminded us of the midwinter feast’s true origins (without killing the festive fun). He piled the snow up outside the windows while the fire roared inside and let wolves roam in the shadows beyond. He made the feast of the nativity as much a time to celebrate the legend of Herne the Hunter, Arthurian legend and Roman myth, as the son of God. Masefield allowed children to imagine, at this most traditional and domestic time of year, a thrilling sense of winter mystery that felt as old as Christmas itself.

Before The Lion,the Witch and the Wardrobe, The Dark is Rising and The Children of Green Knowe, and way ahead of Harry Potter and Northern Lights, Masefield allowed the darkness and mystery of old magic to seep into the modern light. For that alone, he should be cherished.

1 Response to BOOK OF DELIGHTS