I’ve just finished a couple of Siri Hustvedt books; a novel and a collection of essays.
I’ve had Sorrows of an American for ages, but never read it. And within a few minutes, I was so absorbed that I knocked it over in a day and a night.
It’s on one level a kind of family mystery where after the death of a parent, another version emerges. So it is when Erik Davidsen sorts through his father’s papers. He finds a cryptic letter from an unknown woman, which starts him on a search for deeper understanding of the man he loved and respected, but didn’t really know. There are other questions, too, around his dead brother-in-law and his new tenant, a young single mother and artist. And then there are all other mysteries – love and life and art and relationships and death and trauma and memory… You know the drill.

I’ve found that people can have strong opinions Hustvedt’s  books. I have one friend who just loves them – her favourite book is What I Loved. And another who just can’t see it. “All those descriptions of imaginary art works and dreams! Boring.” Actually, I have a dirty little (not-so) secret. I’m a great skipper. I rarely read every word. So the imaginary artworks just blur in my imagination. “Here’s the art,” I say to myself. And move on. (Though my greatest crime, according to my husband, is that I’ll often read the end first). 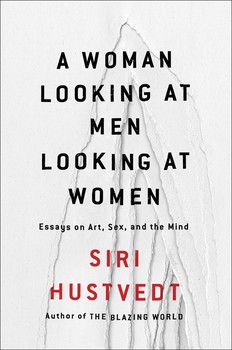 This is my second or even third reading of some of these essays. Despite my abiding interest in the brain/mind story, neither philosophy or science are really my strong suit, and I’ve had the funny experience of reading about the workings of the brain whilst aware that my own brain, sitting there on top of my neck, is itself working so hard that I can almost feel it. This isn’t to say that I’ve not enjoyed these essays. Or perhaps ‘enjoy’ isn’t the right word. This kind of reading is not for entertainment, but for education, enlightenment, growth. I’ll have a binge on this kind of book and then dive into a murder mystery.

(And as an aside, isn’t it an odd feeling when you realise that you’re turning into your mother? Well, not quite, but turning towards her. My mother was a voracious reader of crime and murder –  she had a collection of around 2,000 novels. Since she was by training and temperament a historian, it traced the history of the crime novel. I sold them after she died -and now I really wish I hadn’t!)

Also hard work was a complementary book, The Voices Within by Charles Fernyhough. It’s subtitled The History and Science of How We Talk to Ourselves. Mystics, prophets, poets, artists, writers, schizophrenia sufferers, trauma 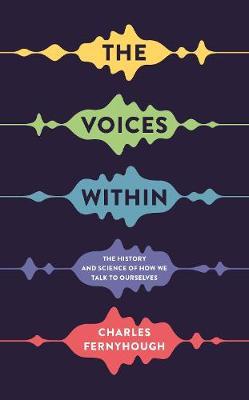 victims, athletes, inventors and many other people hear voices. It’s difficult to research, as you can imagine.  One project involves people wearing a beeper that interrupts them a few times a day. They’re asked then to write down their self-talk as exactly as they can. One subject even did this in a CT scanner, so that researchers could study which areas of the brain were active. Another project involved investigating writers and their literary process. Fernyhough quotes David Mitchell, who describes fiction writing as ‘a kind of controlled personality disorder…to make it work you have to concentrate on the voices in your head and get them talking to each other.’ p94

As a novelist, I spend a lot of time imagining that I am other people. I have written from the points of view of women and men with different personalities and backgrounds and troubles and sympathies. Once I hear and feel the imaginary person, even if he or she is unlike me, I can write the character. I do not calculate my way into these people. i do not make lists of their qualities and decide consciously how someone will speak. They take up residence inside me and begin to speak. Rhythm is important, essential. Different characters have different cadences. Where does that come from? p310