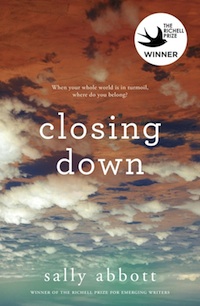 I was at a dinner party here in Castlemaine a couple of years ago when I met Sally for the first time. She was still finishing the book, with chapters flying to and fro between her and her editor at Hachette; I could sense her excitement at the opportunity (the manuscript was the winner of the inaugural Richell Prize for Emerging Writers) and her commitment to the hard, hard work that was involved. So it was a thrill to go as the bookseller to the launch a couple of months ago, and see the pile of novels diminishing as happy punters paid for their copies.

It’s an engrossing read, set in a future that’s maybe not so far away. As a result of climate change and geopolitical shifts, the Australian government is closing down rural towns and communities. Under the all-too-believable program, “A New ERA: Energising Rural Australia”, residents are forcibly relocated and provided with only the barest of essentials. It’s a soul-destroying business; many people simply take the the roads and become ‘walkers’; others suicide.
When Clare loses her run-down rental property, it looks as if her hard-won security will vanish. Here the gritty dystopian world turns a little strange; magical, in fact. With the aid of cat and mysterious town matriarch Granna Adams, Clare manages a kind of happy ending.

Outside Australia, giant refugee camps have sprung up to process millions of desperate people. Granna’s grandson Roberto and his lover Ella are the other protagonists; Ella works at a high level in the aid sector; Roberto is a journalist. Their jobs mean travel, money, a kind of freedom; these can insulate their lives, but can’t block out the surreal disaster unfolding across the planet.

It’s an engrossing read; dystopian fiction, certainly, but there’s hope in there too. Human kindness and goodness can, sometimes, prevail.

I especially loved the teasing suspicion that harmless-seeming old ladies may, just possibly, be able to save the world.