I have just come back from walking in the hills above Chewton, a township to the east of  Castlemaine. Our walk took us from the ruins of the Garfield Wheel (once a massive water wheel that was used to power a quartz crushing mill) along a small portion of the Goldfields Track.
It is so lonely now that it’s hard to believe that once it was a hive of activity. A sea of tents, thousands of miners; there must have been incessant noise where now it’s just wind and bird-calls and silence. Mine shafts and diggings were everywhere,  and you can still see their remains, where soil and rock are heaped in the valleys and gullies and on hillsides. A water race, which fed the wheel, runs through the landscape.
I was thinking to myself as we neared the end of our walk, what have I seen today? I seem to look at the ground quite a lot so of course I saw the path, which was at times made of red clayey soil and quite badly eroded, and then in other places seamed with rock and even areas of exposed reef. Some bush tracks are soft to the foot, with a kind and even springy surface and covered over with leaf litter. Not this track, though there was plenty of debris from the trees all around us; we’ve had some high winds lately, so there were snapped stems with the leaves still fresh and green on them, as well as twigs and branches and the brown sickle shapes of dry eucalyptus leaves. But it was the stone I was more aware of; pieces of slate, flat and grey, and quartz, and sandstone, and rocks that look as if they’re made of iron.
No wildlife to speak of – we heard birds but didn’t see them. My husband spotted a golden orb weaver, a spider with long stripey legs and a  body the size of one of the Greek Colossal olives that we can buy in our local deli. She had a fine larder in the web. 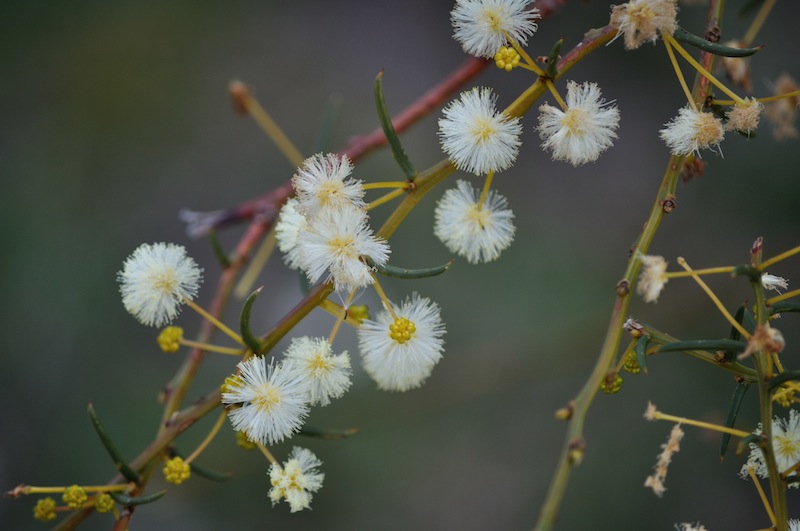 I also noticed a few wattle bushes flowering – it is acacia paradoxa, and that is one of the very few wattles I can recognise – what’s the paradox, I often wonder. Perhaps it’s the contrast between the pale, soft, fluffy lemon balls and the harshly prickled foliage.

I came home, happy, thinking of all the things that I’d seen. There was nothing spectacular, or special, just the things we ordinarily see on any short walk through the bush around here. I was thinking of writing a short piece, describing these things. But the most I’ve been able to do, really, is name names – those that I know – coming up with the words slate, quartz, sandstone; the words twig, leaf, branch. Perhaps those words are enough.
I looked in my bookshelves for something to read, something to quote perhaps. I picked out Selected Poems by Seamus Heaney, but Ireland’s too wet. And then the amazing and wonderful book-length poem Wimmera by Homer Rieth** (read it!). Even Rieth’s Wimmera has more water than we do in the Chewton hills, but I will quote all the same.

And then I reached out something I hadn’t looked at for years. Back in the early 90’s, when I regularly wrote poetry, I contributed to a couple of collections and public readings by Castlemaine Writers during the State Festival (which, by the way, finished with a bang of joyous activity in the park last Sunday). And here’s an appropriate little quote, by me, from me.

My country is of scruffy trees
Prickly growth
Bark litter, stones and melancholy…

Not all that melancholy, actually; not today. We chatted happily when we weren’t walking in companionable silence, and on the way home we stopped at the Bold Cafe, a little place in Wesley Hill (between Chewton and Castlemaine) for Massaman chicken curry, spicy eggplant with tofu and a glass each of excellent cab sav. Something the miners didn’t even know to dream about.