Lately I’ve been finding that I really enjoy reading essays. Dipping in and out of this year’s Best Australian Essays had me searching for the earlier collections; a find of Quarterly Essays from the Op Shop (50 cents each) was a treasure trove of the longer form; Siri Hustvedt’s  A Woman Looking at Men Looking at Women:Essays on Art, Sex and the Mind has me severely challenged – mainly due to my ignorance of philosophy –  but  inspired by her fierce, independent intelligence. I’m still working away on that book.
However my most exciting find was an impulse purchase from the Book Depository. You know how they come up with suggestions for you. They’re along the lines of ‘If you bought that, you’d like this’. So I did. And I did. My new crush is American writer Rebecca Solnit. I finished my bargain buy A Field Guide to Getting Lost in a few gulps, and then ordered whatever of her work was in the system from the library.
I had a day of public transport adventures on Thursday. I enjoy being in transit – good for reading and day-dreaming and making up stories – and The Faraway Nearby was a fine companion.

I’m not sure how to classify. Essays, certainly. Thirteen of them, starting and finishing with a mound of apricots from her mother’s tree. Memoir? Or a series of meditations on age, illness, medicine, travel, exploration, fairytales, family, Mary Shelley, the Marquis de Sade, Che Guevara – finishing not quite where we started, with that pile of fruit. 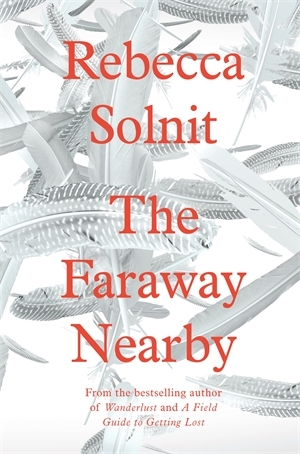 ‘An exhilarating form of  literary cartography,’ says one of the blurbs on the back cover, quoted from a review in the Financial Times. ‘Meandering through diverse subjects…’

Diverse! Flipping through a few pages, I found leprosy, breast cancer, the reception of two polar bears who landed in Iceland (shot dead), Narnia, Chinese artists of the Tang dynasty, Wile E. Coyote and the Easter Island heads… There are so many beautiful and surprising things in this collection, but I thought I’d include these two paragraphs on subjects dear to my heart – reading, writing.

The object we call the book is not the real book, but its potential, like a musical score or seed. It exists fully only in the act of being read; and its real home is inside the head of the reader, where the symphony resounds, the seed germinates. A book is a heart that only beats in the chest of another…

Writing is saying to no one and to everyone the things it is not possible to say to someone. Or rather writing is saying to the one one who may eventually be the reader those things one has no one to to whom to say them. Matters that are so subtle, so personal, so obscure, that I ordinarily can’t imagine saying them to the people to whom I’m closest.

‘To essay’ means to try. Some day soon, I might even essay an essay of my own.