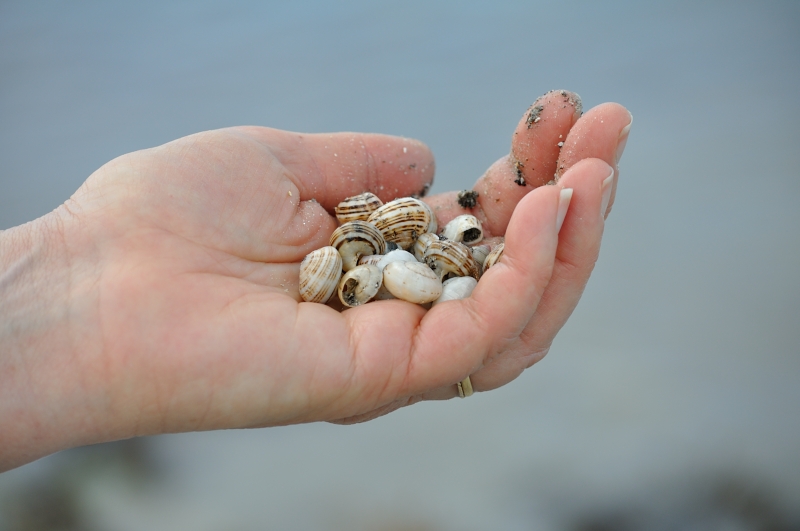 I grew up in Chelsea, one of Melbourne’s bayside suburbs. Our back gate opened onto the beach and I spent a lot of time there, beachcombing. I learned early to look down. Looking down and finding things to pick up is a habit I’ve kept with me all my life.

We moved to Castlemaine when I was seven and the things that I looked down at and picked up changed dramatically. Early on, I was told to watch out for snakes! No more seashells and dead crabs; I saw sparkling quartz rocks; I saw old broken bricks and glass and pottery and rusty bits of metal. When we walked through the massively overgrown cemetery and up into the bush beyond, I saw graves made of different kinds of stone, but also of timber (they’ve been burnt now, and destroyed) and even tin. I was able to pick up old bottles, some made of intriguing purple glass, white doves and clasped hands from the smashed imortelles (those ceramic wreaths under glass domes) and in the Chinese section, a broken terracotta bowl with dragons on it. 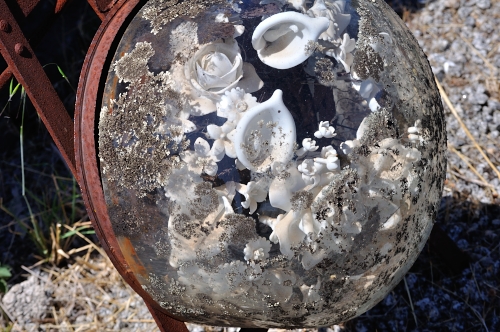 ( A little aside here. Old Mr Jim Sheehan, who owned the house we rented in Campbell’s Creek , told me that he and his friends used to hide in the cemetery while a Chinese funeral was going on, and then when everyone was gone, nick out and take the roasted pork from the ceremonial oven, and eat it. Isn’t that a great story? Every time I look at this structure, I think of little Jim Sheehan stealing the ancestor’s pork! )

Back to the broken crockery and bottles. These fascinating findings didn’t make any sense to me. I knew they were old, but I didn’t understand what that meant.

I have a vivid memory of the day the penny dropped. My dad and brothers and I were walking in the bush out in the back of Campbell’s Creek and we came across the wreck of a cart. It wasn’t in a creek bed or on a track, it seemed to be sitting all by itself in a little dip in the ground in the middle of nowhere. There were two big wheels made of metal and wood. The metal was rusted, the wood was mostly rotted and fallen away, but it was really impressively big. My dad explained to me that the cart or dray would have been pulled by a horse or bullock, and it must have got bogged. The ground where it sat, unlike the areas around it, had lots of reedy grass and tussocks; this was a soak, dad told me; the water didn’t drain through the soil but just sat there and made the ground soft. The fully loaded dray would have been really heavy; the wheels would have sunk down and got stuck; the people couldn’t pull it out, and so they had to just leave it.

Suddenly, there was a story. A dramatic story. Several dramatic stories. In fact, the possibilities that sprang from the abandoned dray filled my eight-year-old mind. Whose was it? Where were they going? Why? Were there any children? What happened to the stuff on the dray? What happened to the people? Where did they go next? Was it night-time? Did they get lost in the bush? Did they wander away from their cart and fall down a mine-shaft (I’d been warned repeatedly about this) or just keep going until they died?

The old dray was not just a piece of junk, but a time machine.