THE SPOILER AND THE TWIST 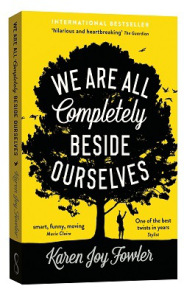 I’ve just finished Karen Joy Fowler’s Booker short-listed We Are All Completely Beside Ourselves, and from the outset I knew. It was right there on the cover. “One of the best twists in years.”
So what is this twist? I kept thinking as I read. The narrator Rosemary tells us that she’s lost contact with her brother Lowell. Sister Fern has disappeared, too –  so it’s likely the twist is something to do with the mystery of the missing sibs. What will it be? Is this a clue? Is that? Interrogating the page for hints and portents isn’t the best way to read, and when the twist came – and here I suppose I am obligated to write SPOILER ALERT! DON’T READ ON IF YOUR ENJOYMENT DEPENDS ON SURPRISE! – I wasn’t actually surprised, because I’d been watching for it. A friend told me she’d almost almost worked it out anyway; I was nearly there too. It comes early, around page 77, and thank goodness for that. Sister Fern is a chimpanzee. With that fact out in the open, the waiting was over and done with and my real enjoyment of the book began.

And it is such a very good book. Intelligent, funny, complex, deeply moving and asking some profound moral questions, it had me thinking hard about what it is to be human. Or a ‘human animal’, as Fowler’s character Rosemary says. I’ve decided to give the phrase ‘human animal’ a whirl myself, for that extra word does change your thinking.

Rosemary’s father is a psychologist; raising a chimp as part of his family is a long-term experiment. Fern and Rosemary grow up together as sisters (one who talks and one who doesn’t) but when Fern begins to show her chimpanzee nature – by biting, hurting, killing a kitten, becoming ‘uncontrollable’ – it’s revealed that she’s property. A thing. She belongs to the university. Though she’s been part of Rosemary’s family for five years, when the experiment has to end, they have no say over what happens to her. She is sold to another university, to be part of other experiments, kept in a cage, artificially inseminated, bred from. The sorts of things we do to animals. Because, well, they’re animals.
“The world runs,” Lowell said, “on the fuel of the endless, fathomless misery. People know it, but they don’t mind what they don’t see. Make them look and they mind, but you’re the one they hate, because you’re the one who made them look.”

A companion piece to Fowler’s novel is the amazing Me, Cheeta. It was also on the Booker list (long- rather than short). My copy doesn’t even credit the author, James Lever; it has an index and a few pages of photographs; it’s a very convincing and clever spoof of the celebrity autobiography –  hilarious, gossipy, possibly libellous, and a wonderful portrait of the so-called golden years of Hollywood. It begins:

Dearest humans,
So it’s a perfect day in Palm Springs, California and here I am – actor, artist, African, American, ape and now author – flat out on the lounger by the pool, looking back over this autobiography of mine…

Cheeta, in case you didn’t know, is the chimpanzee who co-starred with Johnny Wiesmuller in the early Tarzan movies. At the end, when Cheeta is reunited with the aged, dying Johnny by his pool in Mexico, what has seemed like a comic turn becomes  – improbably –  tragic and deeply moving. My copy is (genuinely) tear-stained at that point. 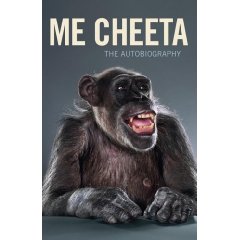 A final word, taken from an interview with Karen Joy Fowler…

The world is a complicated, surprising, often horrible and often beautiful place. I just hope we can keep it. We’re not the only ones who live here.