IN A CASTLEMAINE GARDEN 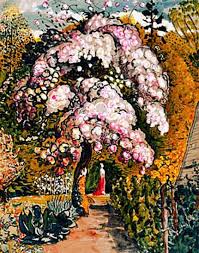 I’ve spent all morning in the garden. Perhaps I’ve done a bit too much for someone with a dodgy back, but I’ve had a wonderful play with rocks, dirt and plants. I’ve wheel-barrowed and planted; I’ve lugged pots and loads of gravel; I’ve neatened a garden bed and it’s imposed instant order and calm, rather like making the bed in a messy bedroom.

It’s a beautiful time of year to be doing these things. I’ve missed spring so far, because I’ve been chained to my desk  with the third Verity Sparks book to finish. But as of last night at 11pm, when I pressed ‘SEND’, I’m (temporarily) released. My morning’s play was unhurried and guilt-free.

The painting is called ‘In a Shoreham Garden’, and it’s by an English artist called Samuel Palmer. I’ve known it since I was little, because there was a reproduction in a book of my mother’s. It was an anthology of words and pictures called A Book of Delights. I couldn’t read but I could look, and I kept turning the pages back to this. The tree exploding with frothy blossom is spring. It’s release and joy and delight. There’s nothing like blossom. Except, perhaps, that burst of golden wattle at the end of winter.

It’s all over so quickly. A couple of weeks ago, the last of the plum blossom blew off in the wind and lay in drifts like snow all over the back courtyard. Now there are teeny little red plums among green leaves on the tree. Soon the birds will be ripping and shredding the leaves to get to the fruit.

But today there is still apple blossom on the tree in the back yard. And roses beginning to bud and bloom, and some opium poppies slyly splitting their pale green pods. All in a Castlemaine Garden.