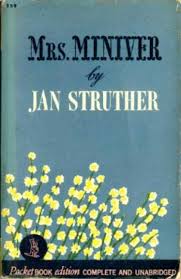 Mrs Miniver lived in an unimaginable world of privilege – though I’m not sure that’s how Mrs Miniver would have seen herself. I think author Jan Struther meant her to be an ordinary middle-class housewife. Yet she had a nanny for her two youngest children, a son at Eton, a country house with a married couple to look after it, a car and a cook and a housemaid. Her observations on the joys of ordinary life – the everyday small happinesses, the flitting fleeting beauties of the mundane world – are lovely, even moving. They’re sensitively, beautifully, minutely described moments of  everyday life and routine.

Not that she didn’t enjoy the holidays but always felt – and it was, perhaps, the measure of her peculiar happiness – a little relieved when they were over. Her normal life pleased her so well that she was half afraid to step out of the frame in case one day should find herself unable to get back. The spell might break, the atmosphere be impossible to recapture.

I’ve never seen the film, but as I read I did have Greer Garson’s perfect face in mind as she

manages to be brave and beautiful at the same time, keeping calm and carrying on in the face of bombs and blitz, gas masks and austerity. Not that there is much donner und blitzen in the book. Getting fitted for gas-masks, taking in evacuees, I did note that Mrs Miniver muses several times that the British are going to war against a Government or a civilization, not a nation.

I have a Tasmanian-born friend who collects instances of Tasmania equated with The End of the Earth/Utmost Darkness/Doom and I did find an instance for her in the book.

Mrs Miniver woke up one morning with a sense of doom, and knowledge that the day contained something to be dreaded. It was not a crushing weight, such as an operation, or seeing one’s best friend off to live in Tasmania; nor was it anything so light as a committee meeting or a deaf uncle to tea: it was kind of welterweight doom.

What I remember of the book is not Mrs Miniver’s stiff upper lip. It is a picture of her sitting in her beautiful drawing room, surrounded by beautiful personal objects…and ringing the bell for tea.