My local Opportunity Shop is a great source of reading matter. I’m always amazed at the new and newish novels that people read and pass on. There’s always a good selection of large paperback crime and thrillers (the B-format ones that retail around the $32.95 mark) but they’re rarely the ones I want. My happy hunting ground is in the $2 classics shelf and among the children’s novels.
A couple of weeks ago I found Go Saddle the Sea by the wonderful Joan Aiken. I think I have written this before – and if I haven’t, I should have – Joan Aiken was one of my first models. It was The Wolves of Willoughby Chase (for years one of my favourite books, and read I don’t know how many times) that started me off on a long love affair with Victoriana. Gas-lamp or Gothic, if it has corsets, carriages and crinolines, orotund language and bizarre surnames (Miss Slighcarp for the evil governess has rarely been bettered), I’m hooked. 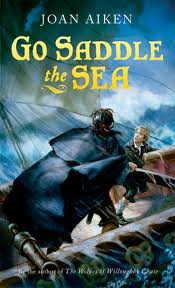 So I was surprised to find that I’d never registered Aiken’s The Felix Trilogy. Go Saddle the Sea, the first book, introduces the hero Felix Brooke, a half-Spanish half-English orphan who, feeling unloved and misunderstood at home with his stern grandfather, runs away to find his father’s family in England.
It’s a ‘quest’ story. Felix, who tells the tale in the first person, sets off  to travel across Spain from the mountains to the sea. Along the way he has many adventures, experiences temporary triumphs and setbacks, encounters a changing cast of characters, makes friends and enemies. It’s a ‘picaresque’ novel; you could say it’s episodic, but it’s meant to be.  Ideal for sporadic reading. Ideal, too, for incorporating the marvellous, the fascinating –  or in the case, of the Comprachicos, the grotesque and horrifying –  from historical research.

Felix is abducted by the Comprachicos.
They “were a secret people, wandering in groups over the face of Europe, sometimes seeming to vanish for fifty or sixty years together, then, apparently, coming to life once  more. In the wake of wards and civil disturbances, plagues or bad seasons, when food was scarce and times were hard, then they would appear, plying their evil trade. What did they do? They supplied the raw material for fairs and peep-shows. And to do this they bought children from hungry parents – or they took orphans whom nobody claimed – they never stole, they drove hard but honest bargains – and they re-made these children, by terrible arts of their own, turning straight bodies into hunchbacks, dislocating joints, manufacturing dwarfs by stopping their growth – sometimes by constructing jars around them, it was said – grafting tails onto human bodies, making normal children into monstrosities. By their skilful surgery they could alter a child’s face so that its own mother would not recoginise it. At the end of Napoleon’s wars, when Europe was full of starving families and homeless children, there were the Comprachicos again, like refuse collectors, picking up human rags and turning them into profitable goods…”

There’s enough material there for a whole book –  a whole trilogy, even – but it’s just a chapter in this one.

2 Responses to GO SADDLE THE SEA