She felt like a ghost. She woke in the night. What was that music? Some troubled beast? Some strange bird of the night? Some lost soul wandering on the moors? Just her dreams?
What wild and weird things existed here?
Sylvia got up from her narrow bed, went to the window, held open her thin curtains, dared to peep.
Nothing. Darkness everywhere.
Darkened street below, darkness of the undulating land, blackness of the forest at the village’s edge, light of a farmhouse far, far off, pale glow on the southern horizon, immensity of stars above. 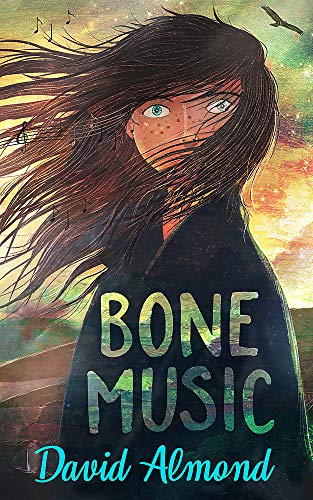 Sylvia is stuck in a village in the wilds of Northumberland, a place of hills, forests and moors with appalling mobile reception. Her mother needs a break from the city, but Sylvia doesn’t want to be there. She misses her bestie Maxine, she misses her circle of friends, her city life of music, gatherings, protests.
But a different kind of life calls to her.

The first she knows about it is the music in the night, played by the strange boy Gabriel on a bone flute.

As their friendship develops, Sylvia finds herself responding to the ancient landscape as if she belongs to it. As if she can go back and become a girl of that time.
Almond shows Sylvia discovering the wildness and beauty of nature alongside the ugliness, violence and brokenness of today’s world. For some readers, passages like this may be too explicit:

But I felt it captured the clear-eyed idealism of the young climate campaigners. A kind of sad and bewildered non-comprehension. How can we keep doing this to our world? I thought of the young girls in our hometown who organised the school strikes.

This is a beautiful YA novel. Would young adults like it? I don’t know.  Many reviewers have remarked on Almond’s singularity; his books really are like no others, written with the immediacy of poetry and a strange and otherworldly flavour all his own which may not be to everyone’s taste.  Bone Music is short, and for some readers it may also be short on story – it’s more atmosphere and feeling than plot.
I loved it.