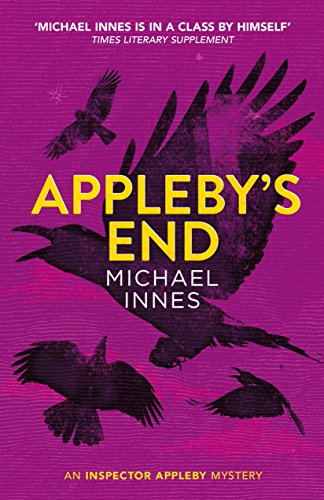 Michael Innes was really John Innes Mackintosh Stewart (1906-94), a Scottish-born Oxford don. He wrote over 40 detective novels featuring Assistant Commissioner of Scotland Yard, Sir John Appleby. The books are – like their protagonist – clever, witty, erudite, psychologically astute, and full of philosophical musings, literary quotations and allusions to art and culture. They are also both funny peculiar and funny ha-ha.
Or perhaps I should just write ‘weird’.

I was first introduced to Michael Innes by my mother, who painstakingly (this is before online book searches) collected all 42 Appleby novels and short story collections. I read one or two because she enjoyed them so much but at the time, I couldn’t appreciate them.

It was to do with expectations. I thought I was going to read a book in which – put simply – there’s a murder or some other serious crime, and the detective investigates and brings the perpetrator to justice in some way. I expected a detective novel to be believable, or at least to be able to suspend disbelief as I read. I expected clues, leads, investigations. Characters, relationships, motivations.  That sense of place, too. I love to visit the California of Raymond Chandler’s Philip Marlowe, Ross MacDonald’s Lew Archer and Sue Grafton’s Kinsey Milhone. 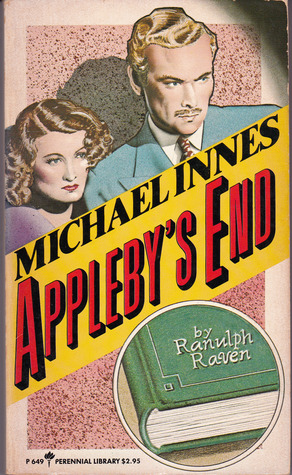 But age and lock-down have changed something, and now these whimsical and funny-peculiar novels are proving addictive.

I’ve just read five in a row.
Death at the President’s Lodgings was an early book, and almost a straightforward Oxford-don murder mystery with a great deal of Oxford-don-type learned conversation. A Private View is a romp set in a London of artists and models and poseurs, spies and forgers and a crusading vice-obsessed Members of Parliament, which ends in a car-chase and shoot-out in a quarry on a ducal estate.
Appleby’s End, which is my favourite so far, is a surreal tale, with deaths but no murders, set in a snowbound rural England complete with aristocrats and common folk equally bizarre and eccentric in their behaviour and motivation. (Prize pigs turned to stone. A woman who thinks she’s a cow. A long dead Victorian mystery writer  seeming to predict the future.)
I’ve illustrated this post with a few of the different covers.
The Long Farewell featured forged Shakespearean documents, a bigamous academic, a beautiful amnesiac barmaid and larcenous American collectors. 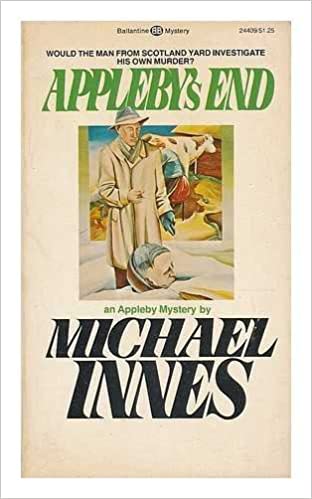 And I can’t even begin the describe fever-dream that is The Daffodil Affair because it’s one of the silliest books I have ever read. Just let me say… a failed Utopian community in the far reaches of the Amazon, presided over by an evil genius who’s kidnapped a whole London house, a carriage horse and a whole lot of  psychics in his quest for world domination.

I suppose the determined unreality of the Appleby books is rather a problem if you consider that people are getting stabbed, poisoned, shot, blown up etc etc in such a jolly manner. And that the sexist, racist, xenophobic and class-bound attitudes of the time do raise their ugly heads.

Just one more thing. The writing. Deeply unfashionable, I suppose, or just plain old-fashioned. Takes a bit of patience.  Lots of word-play and cleverness, lots of  description complete with abounding pathetic fallacies, heaps of adjectives, and those evil adverbs.
But – what fun, and what pleasure – all these beautiful word pictures.

Just one example.
It’s from Appleby’s End. Appleby and his soon to be wife-to-be Judith Raven are floating down a river sitting uncomfortably on top of a sinking, wrecked carriage. And it’s snowing.

The river was narrowing again. Now etched in moonlight, and now altogether shadowy and obscure, there floated by on either hand delicate alders and stout, gesticulating elms. Willows, pollarded and rime-covered, overhung the river like frozen cascades; and presently a line of poplars, aloof and towering, cast great bars of shadow obliquely across the water on which snow softly fell. The carriage as it floated smoothly through this wintry nocturne rotated slowly on its axis, so that the whole scene was like a chill kaleidoscope in white and black and silver and grey.

Just an additional note. J.I.M. Stewart was for ten years  Jury Professor of English at Adelaide University (from 1935) and there’s often a little nod to Australia in his novels. Apparently he didn’t think much of us. In 1940, he thanked his funding body for its financial support for lectures in Australian literature, but said, “unfortunately they have neglected to provide any literature.”
He talked instead about D H Lawrence’s Kangaroo.