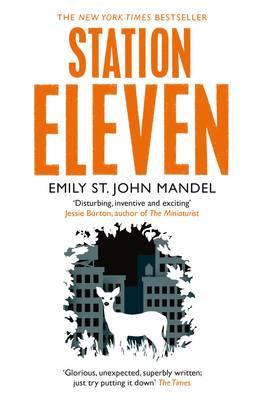 I had a rather intense day on Saturday. I had an acupuncture appointment in Melbourne, so I caught the train to Southern Cross station, and then a tram out to Preston. My mood might have been different if I’d been reading another book – but my novel for the day was Emily St John Mandel’s novel Station Eleven.

The action moves from the last days of civilization as we know it, to Year 20. That is, 20 years after the Georgia Flu has wiped out 99.9% of the planet’s population. I read the first few chapters, dreading what was to come. It’s going to end badly, I thought. I had in mind Cormac Mc Carthy’s The Road.  I was thinking of terrible violence, crazed feral killers, babies roasted on spits, hunger and desperation and despair.

But – is this a spoiler? –  Station Eleven was more hopeful and more enjoyable. For starters, it was only the people that died, not the animals, not the plants and trees and crops, and so by Year 20 there’s some sort of post-civilization civilization beginning to emerge. The book follows The Travelling Symphony, a band of actors and musicians, as they move through the country around the Great Lakes, putting on  Shakespeare plays and giving concerts; it moves backward and forwards to the time just before the Flu; we meet characters then who survive into the now, and some who don’t, but whose lives carry forward into the future through art or memory or friendship.

Because the book put me in an odd frame of mind, my day travelling around Melbourne and the inner suburbs on public transport was quite (pun intended) trippy. I kept seeing and hearing more than usual. I asked myself, is the world is more vivid today? Or am I more receptive today? I had a few moments of odd wonder, where everything seemed beautiful – the wrappers and drink bottles and cans beside the train tracks; the weeds, unstoppable, sprouting through the gravel between the sleepers, the graffiti more like messages from some underworld or otherworld, than vandalism. Then what took me over was the usual appalled disbelief at the strange, mad, unhospitable world that we have made for ourselves to live in. In Station Eleven, the survivors look back to the technology of the day – the phones, the TVs, computers – as if these devices defined their lost world. I suppose they do. If you are younger than me – even in your 30s and 40s – it is all you have ever known. You haven’t known a world without mobiles, laptops, the Internet.

It seemed to me on Saturday in the city, that it’s quite a hostile world if you aren’t up to it, if you aren’t young and fit and resilient and well-off. I saw the homeless people in their sleeping bags and cardboard shelters, with their sad little signs; I saw a bearded, shoeless man at a tram stop, holding a half-empty 2-litre container of milk and a drunkenly raucous woman on the tram, talking and laughing without a break, while the other travellers tried to ignore her; a God-botherer with a microphone shouting angrily about sin in the Bourke Street Mall.

As I got off the tram and walked up to the clinic, I was thinking that this poor world is sinking under the weight of our sadness and stupidity. Thinking, as I often do, that we have made for ourselves a stupid world full of things we don’t need; we’re fuelled by compulsions that harm us, we believe any old bullshit that lures us in our greed and need and fear; we’re shitting in our own nest and before long, our lovely planet will become inhospitable not just to a sane or contented or happy human animal but to any human life, full stop.

And then I opened the gate, and the weeping cherry tree had blossoms on it, like pink stars, and I caught my breath as the two things smashed together – the hideous world and the beautiful world – as they do. As they always do.