“DNA Nation”, a 3-part series on SBS TV, followed Ernie Dingo, Ian Thorpe and Julia Zmiro as, using DNA mapping of human populations, they discovered the paths taken by their ancestors out of Africa. Last weekend, I watched the last episode and was moved to tears as Ernie Dingo discovered that 40,000 years ago, and more than 1500 generations ago, his mother’s fore-mother was living by the Murchison River in WA. It’s where Ernie’s people come from – really come from.

It’s humbling, too, to think of those ancestors who made the first great sea crossing – from what is now Timor Leste – all those thousands of years ago. The map of human migration led the three travellers from our ancient origins in Tanzania to Arabia, Turkey, India, Khazakistan, Sardinia, Scotland and Timor Leste.  Showed how ridiculous any thought of racial purity (and thus, racism) really is. 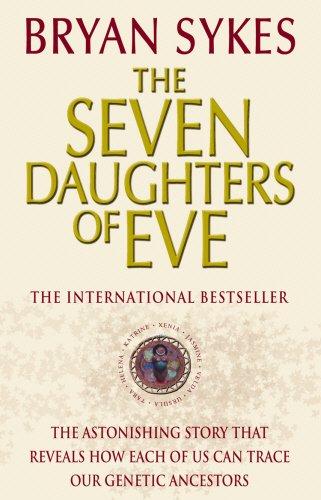 I was chatting about the program to Ross, one of our lovely customers in the shop, and he loaned me a couple of books by Dr Brian Sykes, a world authority on DNA and human evolution. The Seven Daughters of Eve is the story of his research using mitochondrial DNA. This gene passes through the maternal line. Thus, only if Ernie Dingo has a sister, will his mother’s line, unbroken for forty thousands years (what an amazing thought that is!) continue.

What I particularly enjoyed about The Seven Daughters of Eve was Syke’s empathy and imagination (not always on display in science writing). He says that his kind of genetics puts the emphasis where it belongs – on individuals.

I am on a stage. Before me, in the dim light, all the people who have ever lived are lined up, rank on rank, stretching far into the distance. They make no sound that I can hear, but they are talking to each other. I have in my hand the thread that connects me to my ancestral mother way in the back. I pull on the thread and one woman’s face in every generation, feeling the tug, looks at me… These are my ancestors. I recognise my grandmother in the front row, but in the generations behind her the faces are unfamiliar to me. I look down the line… I want to ask them each in turn about their lives, their hopes and their disappointments, their joys and their sacrifices… I feel a strong connection. These are all my mothers who passed this precious messenger from one to another through a thousand births, a thousand screams, a thousand embraces of new-born babies. the thread becomes an umbilical cord.

The Seven Daughters of Eve by Brian Sykes, Corgi, London, 2002.