…and I went to an International Women’s Day breakfast at the Tea Rooms in the Botanical Gardens. I had to pass on the food – muffins, frittata and the most delicious-looking berry muesli provided and served by our local Secondary College – because of nerves. I was one of the speakers, you see.

The first speaker, Amy O’Neill, does an amazing amount of volunteer stuff in the local community as well as working as a partner in a very successful building business, Vic Restorations. She’s won several awards lately, attended a huge rural women’s conference in Canberra and all I can say is, she must have an impressive load of energy.

She was followed by a local singing group, The Deborah Triangles (local in-joke, that – there is an area of gold-mining called that up the Calder in Bendigo) who did “Georgy Girl” complete with the whistling, camped it up with “I’ve Never Been to Me” and concluded triumphantly with “I Will Survive”. Then I was on. Here’s (more or less) what I said.

The theme today is “Women Inspiring Women.” I’m a writer, so I could have claimed as  inspiration many wonderful female authors going right back to Jane Austen. Especially Jane Austen, though since we’ve just had the 200th anniversary of Pride and Prejudice  she’s practically a deity – certainly an immortal. However my inspiration is human, not a writer and a lot closer to home. But before I tell you about her I’ll give you a little bit of my story.

I’ve lived in Castlemaine since 1986 – with a three-year stint here when I was a child during the middle 1960’s. I moved here at the time I committed career suicide. I’d just given up a secure, well-paid, permanent position as a primary school teacher with the Education Department of Victoria. Why? A year or so before I’d been awarded one of the Age Short Story prizes, and since then I’d been consumed with a mad desire to be a writer. I could have done the sensible thing and written in my spare time or even taken some leave without pay, but no. I thought I wouldn’t take it seriously unless I quit the Department. And so I did.

I had to work part-time of course, but nevertheless in that first year I did a lot of writing.   I won a Victorian Fellowship of Writers short story prize (and that story was later published in an anthology) and I also wrote a children’s story, The Possum Charmers. It was published in 1987 and since then I have had 9 more children’s books published. My 10th book, The Truth About Verity Sparks, was the first to have gained any real traction. It’s sold well, been appreciated by young readers, and – most thrillingly – it was awarded Honour Book in the Younger Readers section of the CBCA awards last year. I’ve got a sequel, Verity Sparks Lost and Found, due to be released in May.

Now, back to my inspiration. I said she was close to home and so she is. She’s my mother, Helen Green. She was a primary school teacher, a secondary school teacher, a senior mistress, and then in the 1970s she became vice-principal and finally principal of a large suburban high school. In those days there were few female principals and fewer still female senior bureaucrats in the Education Department. Which was why her next career step was really an enormous leap. She became Assistant Regional Director of Education for the Loddon Mallee region, based in Bendigo but taking in a huge region going down to Kyneton and up as far as Mildura and to the SA border. She held that position for 8 years, and for several of those years was Acting Director.

My mother was a very capable, intelligent and ambitious woman and she was passionate about education and community. Hers was a very public role. She was continually going to meetings and sitting on boards and committees. She did a great deal of public speaking. This was so even after she retired, when she was active in Continuing Education, Friends of the Library and University of the 3rd Age.

Now, I’m a writer. Writing is a private, solitary, even a hermit-like profession. I spend a great deal of my time sitting on my bottom alone – or with the dog – in my office in front of the computer screen. I’m not engaged in the community in the way my mother was. So how has she inspired me? Here’s how.

She gave me a belief that if you love something, if you’re committed to learn everything you can about it, to work hard and persevere – then that’s what you should be doing. No matter what your gender or whether people think you should be at home with your children or whether people think you’re crazy for giving up a steady income – that’s what you should be doing. My mother is inspiring because she was one of those women who opened up a space for the women who followed after her and it’s a great thing that most women in Australia now take it for granted that they can follow their dreams – whether it’s in the building industry, like Amy, or in the study, like me. My mother is also inspiring because she recognised that setbacks and disappointments do occur. Books are rejected, you hit the glass ceiling. Things do not always work out as you hope. But you can maintain the love of what you do. You can stay engaged and curious. You can keep learning and expanding your vision.

My mother hit the glass ceiling. When she applied for the position of Director, despite having acted for several years in the role, she was didn’t get the job. A man did. She appealed, and she lost. But my mother’s passion was for education and community and it was a real force in her life. She put her disappointment behind her and in the last fulfilling years in her job, she did a series of what my father referred to as ‘royal tours’. She didn’t drive, you see, and so she had a driver take her to visit many remote and rural schools whose communities had not seen anyone from the Department for years, sometimes decades. One of her loveliest memories was of a visit to Murrayville, near the SA border. What seemed like the whole school community turned out, there was a band and a fabulous afternoon tea, and a banner saying “We are honoured to welcome Mrs Green”.

Sadly, my mother died before The Truth About Verity Sparks was published. I dedicated it to her, and when I was presented with my CBCA award in Adelaide last year, in my heart I said as I was handed the envelope, “This one’s for you, Mum.” 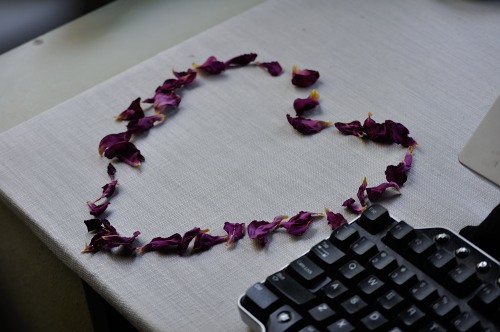 Thank-you to my husband for the surprise rose-petal heart next to my keyboard.