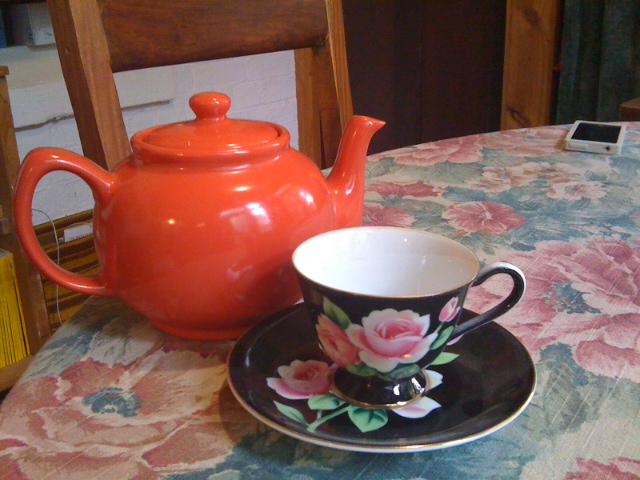 I went to Melbourne last week, on the train. The purpose of the outing was ostensibly (isn’t this a great word? I had to look it up to make sure it meant what I thought it did – and it did) to take my son and his friend, both 15-year-olds, to watch the Grand Final Parade. But it was rainy and cold, the players would have been inside cars, and the boys couldn’t be bothered so they went off to look in shops. As did I. Into the Bourke Street mall, and the big department stores. If ever I actively enjoyed shopping, I don’t any more. Almost immediately, the whole exercise began to take on a nightmarish quality.  The ground floor cosmetics section was pumping. Lights, mirrors, reflections, signage; thumping music; myriad separate counters and kiosks each with their own uniformed staff spruiking; a constant stream of women moving through the vast space broken up with signage and partitions and shimmering displays of packaged magic.

Up the escalator, and here also were the female hordes moving through the various departments, on their way from here to somewhere else, and the areas set aside for the young and cool were crowded, but in amongst the middle-aged clothes, in the depths, there were only a few browsers hunting and pecking amongst the racks and tables… The clothes seemed be clumped together without logic, packed closely so you had to struggle to remove an item, and then once removed, not what I thought they were. I tried on a shirtdress, because I had some idea in my head that the shirtdress might be It, the style, a solution, a possible uniform for middle-aged me. The shop assistants, two of them, were at the counter bitching about one of their supervisors, and scarcely broke off to acknowledge me. The shirtdress had a strange asymmetric hemline (why?), and in the strange lighting of the dressing-rooms, looked not a cheerful cinnamon brown but a murky cowpat tone. Still hopeful, I thought that perhaps there might be others out there, with normal hems and in less trying shades. The shop assistants were still hot on the topic of the supervisor, so I continued the search but found only bizarre tunics stitched from an assortment of warring fabrics, shifts and sheaths, synthetics with the feel of shower curtains and a really lovely grey wool winter coat reduced by 50% to $200. I gave up. To the twee-sounding ‘Intimate Apparel’.

Who would have thought there are so many variations on the basic bra? Acres of racks and tables, amongst which I could not find what I was looking for; all the bras were the same but different and of course the style I was after had been discontinued, or had never been made. I began to feel that it was all obscurely my fault. After all, every other woman wanted push-up underwire and padded. I picked out a near-approximation. It was in ‘nude’, which is a sallow beige colour.

But the fitter had her back to me and was engaged in a long conversation with two old friends – or perhaps colleagues, for they were enumerating the illnesses of retired salesladies. I waited, while the saleslady briskly served three or four younger women with sports bras and moulded T-shirt bras and assertive balconettes. The fitter prattled on. I looked down at my unworthy item of apparel. It was flaccid and nude. I gazed around at the breastplates on display; hundred of paired cups hung expectantly, awaiting animation from splendid young and perky bosoms… Demoralised and defeated, I placed the bra on the counter and left the store. And I realised that I was in Barbara Pym territory.

This is from ‘Excellent Women’.

I had a feeling that I must escape and longed to be lost in a crowd of busy women shopping, which was why I followed blindly the crowd that surged in through the swinging doors of a large store. Some were hurrying, making for this or that department or counter, but others like myself seemed bewildered and aimless, pushed and buffeted as we stood not knowing which way to turn. I strolled through a grove of dress materials and found myself at a counter piled with jars of face-cream and lipsticks…There was a mirror on the counter and I caught sight of my own face, colourless and worried-looking, the eyes large and rather frightened, the lips too pale. I did not feel that I could ever acquire a smooth apricot complexion but I could at least buy a new lipstick, I thought, consulting the shade-card. The colours had such peculiar names but at last I found one that seemed right and began to turn over a pile of lipsticks in a bowl in an effort to find it. But the colour I had chosen was either very elusive or not there at all, and the girl behind the counter, who had been watching my scrabblings in a disinterested way, said at last, ‘What shade was it you wanted, dear?’

I was a little annoyed at being called ‘dear’, though it was perhaps more friendly than ‘madam’, suggesting as it did that I lacked the years and poise to merit the more dignified title.

‘It’s called Hawaiian Fire’, I mumbled, feeling rather foolish, for it had not occurred to me that I should have to say it out loud.

‘Oh, Hawaiian Fire. It’s rather an orange red, dear,’ she said doubtfully, scrutinising my face. ‘I shouldn’t have thought it was quite your colour. Still, I think I’ve got one here.’ She took a box from behind the counter and began to look in it.

‘Oh, it doesn’t matter really,’ I said quickly. ‘Perhaps another colour. What would you recommend?’

‘Well, dear, I don’t know, really.’ She looked at me blankly, as if no shade could really do anything for me. ‘Jungle Red is very popular – or Sea Coral, that’s a pretty shade, quite pale, you know.’

‘Thank you, but I think I will have Hawaiian Fire, I said obstinately, savouring the ludicrous words and the full depths of my shame.

Back in the department store, I was desperate for tea. Another Pym situation. There were in-house cafes. But they were brightly lit and exposed, where you would perch amongst the endlessly flowing traffic of shoppers. Worse, you would not be served. No-one would look after you. You’d  have to go up to the counter yourself when the wait-staff called your name. No. I was looking for somewhere quiet, a burrow, a refuge. Was there somewhere an ideal, dream-café where elderly waitresses in black with white aprons would walk on carpet to my dimly-lit corner with bolstering tea leaf in a pot, and extra hot water, and a plate of toasted tomato sandwiches…

In the Melbourne of my childhood and even young adulthood, there were such places. Though coffee culture was burgeoning, the expresso machine wasn’t ubiquitous. Melbourne was still had a tea-drinking town. When I went shopping with my mother in the early sixties, there was a choice of tea-shop bolt-holes. I remember one one downstairs, where each booth had dinky little lamps on the walls but the rest of the place was practically dark. Was it called Raine’s? The waitresses knew us; I would always order a toasted ham sandwich and an orange juice. There were several more in Collins and Little Collins, and they were all dim, quiet, restful, a respite from shopping, where ladies could ease off their stilettos under the tables and slump their corseted bodies back against the padded seat-backs. But here in 2012, eventually I stumbled across the mall, through a couple of arcades – and passing by many crowded noisy cafes – to Dymocks downstairs in Collins Street, and there at last was able to sit out of the foot traffic and have a pot of tea. Pot of tea. Words of comfort and cheer. Even though the tea was in a bag, and far too weak, and there were no toasted sandwiches but a sawdusty muffin, the idea of ‘pot of tea’ and all it stands for was there…

This obsession with tea is also of course classic Pym territory.   I shall have to go to the bookshelf and do a ‘tea’ search. Perhaps when I have  some spare time, I can Google ‘Tea in English Literature.’ But right now, the kettle is whistling and the pot is waiting.